Argentina reaffirms sovereignty over the Argentine Antarctic Sector extending between the 25th and 74th meridians of west longitude, south of the 60th parallel of south latitude.

Ever since the opening of the first scientific station (Orcadas Base) in Laurie Island, South Orkney Archipelago, on 22 February 1904, Argentina has been constantly and uninterruptedly present in Antarctica, which constitutes the longest continuous presence in such continent. We have six permanent bases (Carlini, Orcadas, Esperanza, Marambio, San Martin and Belgrano II) and seven temporary bases (Brown, Primavera, Decepción, Melchior, Matienzo, Cámara and Petrel).

Argentina is one of the twelve original signatories of the Antarctic Treaty signed in Washington on 1 December 1959. The Treaty sets forth that Antarctica is to be used exclusively for peaceful purposes and forbids any military activity, as well as the testing of any type of weapons. Furthermore, it properly protects the reaffirmation of Argentine sovereignty over Antarctica in the face of claims overlapping Argentina's own. Hence, the geopolitical significance for Argentina of maintaining a strong and effective Antarctic Treaty System, which also ensures the existence of a large peace zone along our southern border.

Scientific activity, ensured by the Argentine Antarctic Institute, is central to our Antarctic policy, which places Argentina at the forefront in terms of scientific production in the white continent. Moreover, Argentina is currently advancing a proposal for a protected maritime area in the western zone of the Antarctic Peninsula and the northern part of the Scotia Arc, together with Chile, within the framework of the Commission for the Conservation of Antarctic Marine Living Resources, which will make it possible to better understand and protect the resources existing in a crucial region of the continent that is part of our national territory.

The continuity of Argentina's Antarctic policy and the role of our country with regard to this issue require intense and continuous foreign actions of a diplomatic and scientific nature. This effort is aimed at increasing Argentina's influence over the decision-making process at Antarctic forums and ensuring sovereignty over Argentine Antarctica.

Furthermore, the Argentine Republic has sovereignty not only over the continental territory, but also over its islands and territorial sea, which extends to 12 nautical miles. Likewise, Argentina has sovereignty rights for exploration, exploitation, conservation and management of natural resources, both living and non-living, in its Exclusive Economic Zone, which extends to 200 nautical miles. In this regard, the goal of our foreign policy is to establish, within its sphere of competence, the conditions for controlling that part of the

Argentine Republic, through bilateral agreements and participation in multilateral schemes for protection of natural resources.  Argentina also exercises sovereignty rights over the continental shelf for the purpose of exploration and exploitation of its natural resources. The determination of the outer limit of Argentina's continental shelf has made it possible to finally consolidate its sovereignty rights over thousands of square miles of seabed and marine subsoil.

Thursday 27 de September de 2018
Argentina - Chile: Meeting on political coordination in antarctica-related matters
The 14th Meeting of the Argentina-Chile Ad-Hoc Committee on Political Coordination in Matters relating to Antarctica...
Saturday 19 de May de 2018
Argentina and Uruguay agree on Scientific Cooperation in Antarctica
The Argentine Foreign Ministry, through the National Directorate for Antarctica (DNA), and the Uruguayan Antarctic... 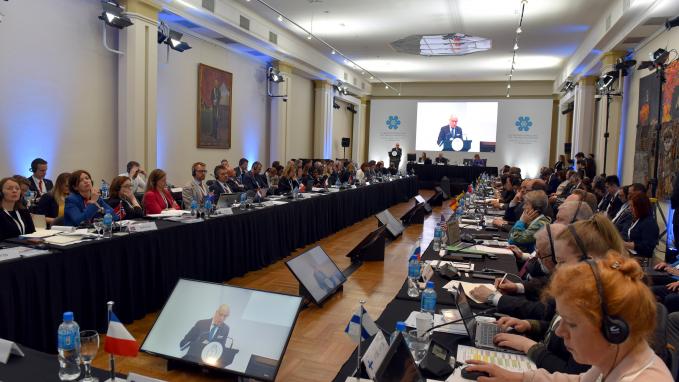