The San Martin Palace is located at 761 Arenales street, in the neighbourhood of Retiro. It sits opposite the beautiful and historic San Martin Square, built on a natural sloping hill which overlooks the River Plate.

San Martin Square has undergone several transformations over the past four centuries, possibly more than any other area in the city. Until the late 17th century, it was known as “El Retiro [The Retreat]” after a monk’s hermitage that stood on the site. In the early 18th century, it served as a slave market and warehouse; in 1800, the second and last Bullring of Buenos Aires was built on the square, where it operated until bullfighting was banned in 1819. The General San Martin Regiment of Mounted Grenadiers would later be established here, until the definitive landscape of the square and its surroundings began to emerge towards the late 19th century.

Former Anchorena Palace
The Anchorena Palace was built between 1905 and 1909 by the architect Alejandro Christophersen, at the request of Mercedes Castellanos de Anchorena.
It is a striking example of the strong influence at the time of the École des Beaux-Arts. The Palace is inspired by the project “Un hôtel à Paris pour un riche banquier”, which earned Jean-Louis Pascal, Christophersen’s teacher and mentor, a Grand Prix de Rome—the most prestigious architecture prize at the time—in 1866. The sculpture-like façades display convex mansard roofs, domes, chimneys, oeils-de-boeuf; the columns and pilasters along the two main floors and balconies are supported by grand corbels.

The winter garden on the façade facing Basavilbaso street reflects the quality of the building’s blacksmithing work, produced at the Zamboni workshop in Buenos Aires. The oval-shaped cour d’honneur encloses a well-proportioned area of skilful composition, defined by an arcade bounded by Doric columns, grand staircases, interior fronts, mansard roofs with curved lines, and two domes.

While it looks like a single complex, it is comprised of three residences: one facing Esmeralda street, once inhabited by Mercedes Castellanos de Anchorena and her son Aaron; a central residence, where Enrique Anchorena lived with his family; and another facing Basavilbaso street, formerly inhabited by Leonor Uriburu, Emilio Anchorena’s widow.

However, the differences in the interiors of these mansions are not limited to their surface layers—they also have dissimilar spatial distributions: the hall of the third residence is three times as high, and the main staircase is not placed as prominently as in the other residences. Nevertheless, according to the original drawings made by the building’s architect, the location of the main staircase in the third mansion was more aligned with the postulates of the École des Beaux-Arts.

There are some differences in the interiors of the three residences. While the interior of the mansion located on Esmeralda street and the central mansion are similar, with a stucco finish on mural surfaces, the residence on Basavilbaso is inspired by Neoclassicism and by the Renaissance, with a faux Parisian stone finish in the Hall of Honour.

The Anchorena Palace hosted several important social events, such as the Independence Centennial ball of 1916.

The San Martin Palace, a national historic landmark, houses works by Argentine and Latin American artists of the 20th century, such as Antonio Berni, Pablo Curatella Manes, Lino Enea Spilimbergo, and Roberto Matta, among others. Additionally, the Ministry of Foreign Affairs and Worship has a Collection of Pre-Columbian Art, featuring ceramic, stone, and metal pieces by peoples who lived in the northwest of Argentina, such as San Francisco, Vaquerias, Condorhuasi, Cienaga, Aguada, and Santa María. The Ministry also has a specialized library on international law and the history of international relations. The building is a valuable testament to the level attained by French classicism architecture and to the adaptation of eighteenth-century French residence types to the local medium.

IMPORTANT: guided tours may be suspended without prior notice when protocol activities are taking place at the Ministry of Foreign Affairs and Worship. 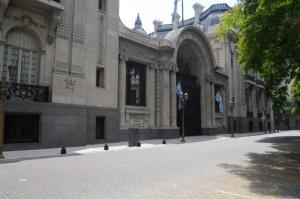