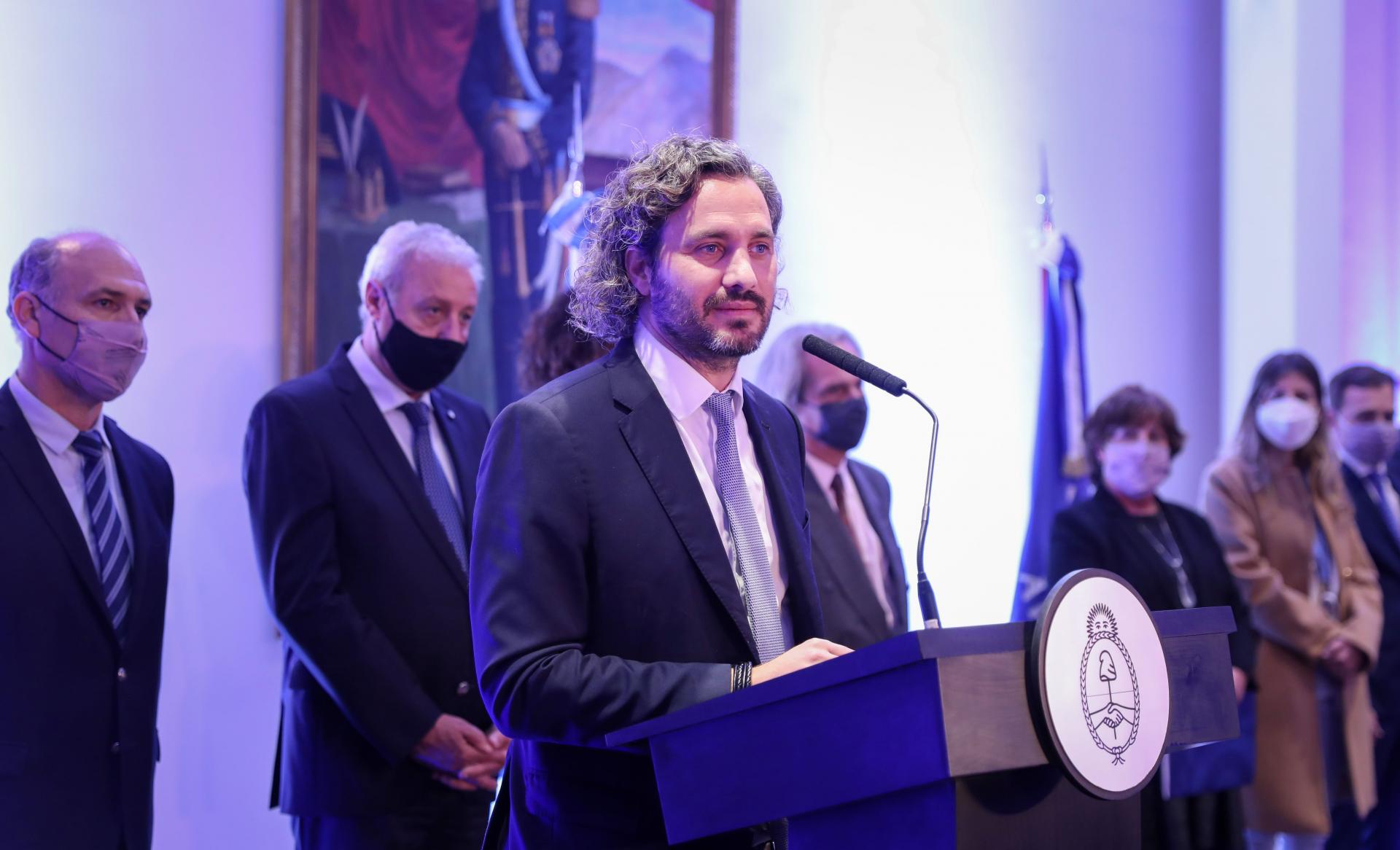 Foreign Minister Cafiero: “Argentina has professional diplomats who are well trained to defend the national interests”

At Palacio San Martín, Foreign Minister Santiago Cafiero headed the official commemoration ceremony for Argentine Diplomats’ Day annually celebrated on 29 September and said to the Argentine foreign service members that “this day, we commemorate the work of those who create bonds with other nations, those who build trade, cultural and political bridges to help achieve a specific goal: for our people to live a little better each week.” And he noted: “We are proud to work with you.”

Cafiero reviewed the main issues on Argentina's diplomatic agenda and stated that “Argentina has a professional, stable and trained team to defend the national interests, and I wish to highlight the notion of ‘national interest.’ It is perfectly possible to define it, especially if it we translate it into the promotion of our country's material and spiritual wellbeing. Our diplomacy is always part of the picture. In other words, our diplomats,” he added. And he especially recognized the work done to repatriate 205,000 Argentine citizens stranded around the world during the pandemic.

Cafiero reiterated his commitment to pursue the agenda of the knowledge economy to conquer new markets for Argentine technological companies. “In this new stage we want to showcase various achievements, such as those in Washington some weeks ago; during a meeting we were able to see how Argentine technology, intelligence and knowledge can merge to manufacture satellites and we are in the process of becoming competitors in that field that seemed so distant; and we can already see this. In other meetings we can see the potential of the knowledge economy, in relation to which diplomacy promotes not only unicorns and big technological companies, but also a large number of SMEs that are currently exporting services,” and he added that “it is not the future, it is now: the knowledge economy is Argentina's third largest exporting sector.” Last year, USD 6.2 billion was exported by that sector alone, which employs 360,000 people, mostly young people; in software, which is one sector of the knowledge economy, in the last two years employment increased by 15%, and there we have vast potential to open more markets for our industry.”

Together with the Foreign Ministry's top officials, he said: “I intend to talk to all my colleagues around the world, leaving no one out. And that is impossible without our diplomacy. I want to be a facilitator of presidential diplomacy, in relation to which President Alberto Fernández is always up to date as an active protagonist. Therefore, I also need you.”

“Not only am I introducing the new team of our administration, but also, during this week the ISEN (the Argentine Foreign Service Institute) entrance examinations are being held, and that is the future, the seeds that our diplomats know how to plant, and which is a continuation of the spirit that lives in many of you, already well-established diplomats, and which you see reflected in so many young women and men, who are taking the exam with great enthusiasm and commitment,” stated Cafiero and stressed: “we are gathered today to commemorate Diplomats’ Day, and we probably have different backgrounds and views, but if we are here, if he have embraced civil service, we clearly have a lot in common.”

“We will be working with firm commitment, always very receptive to constructive criticism. Always ready to listen and reflect on decisions made or to be made or which offer room for improvement,” he stressed.

In addition, the Minister of Foreign Affairs, International Trade and Worship, stated: “Our diplomatic service is and has been present at all international fora to defend sovereignty over the Malvinas Islands or to support and promote human rights. Argentina is permanently holding substantive discussions, this transcends ideological matters, there is a true spirit of defence of national interests, and that underpins those interests,” he added.

Cafiero stressed that “Argentina will continue to promote multilateralism, that is part of our vision, and we will creatively pursue bilateral relations to improve the quality of life of Argentine citizens, always considering the national interest. However, the world will be spending quite some time defining sustainability for the post-COVID era.”

In that context, Cafiero stressed the notion of triple sustainability: environmental, economic, and social. “Environmental sustainability, how we take care of our common home, will be part of a global discussion and Argentina will take part in it through its diplomats, both men and women. In addition, economic sustainability, as we have stated, will require a development model -for our country and for the world- that fosters equality, that stops plunging men and women into poverty, and which is based on inclusion rather than exclusion. As Pope Francis recalls, no one is saved alone and the pandemic has erased borders,” he stated.

In closing, he noted that “the ethics of solidarity are here to stay, and we need to export it to the world. Social sustainability is also important, as there is no way we can build a free, just and sovereign country if we do not have equitable social development,” he stressed.