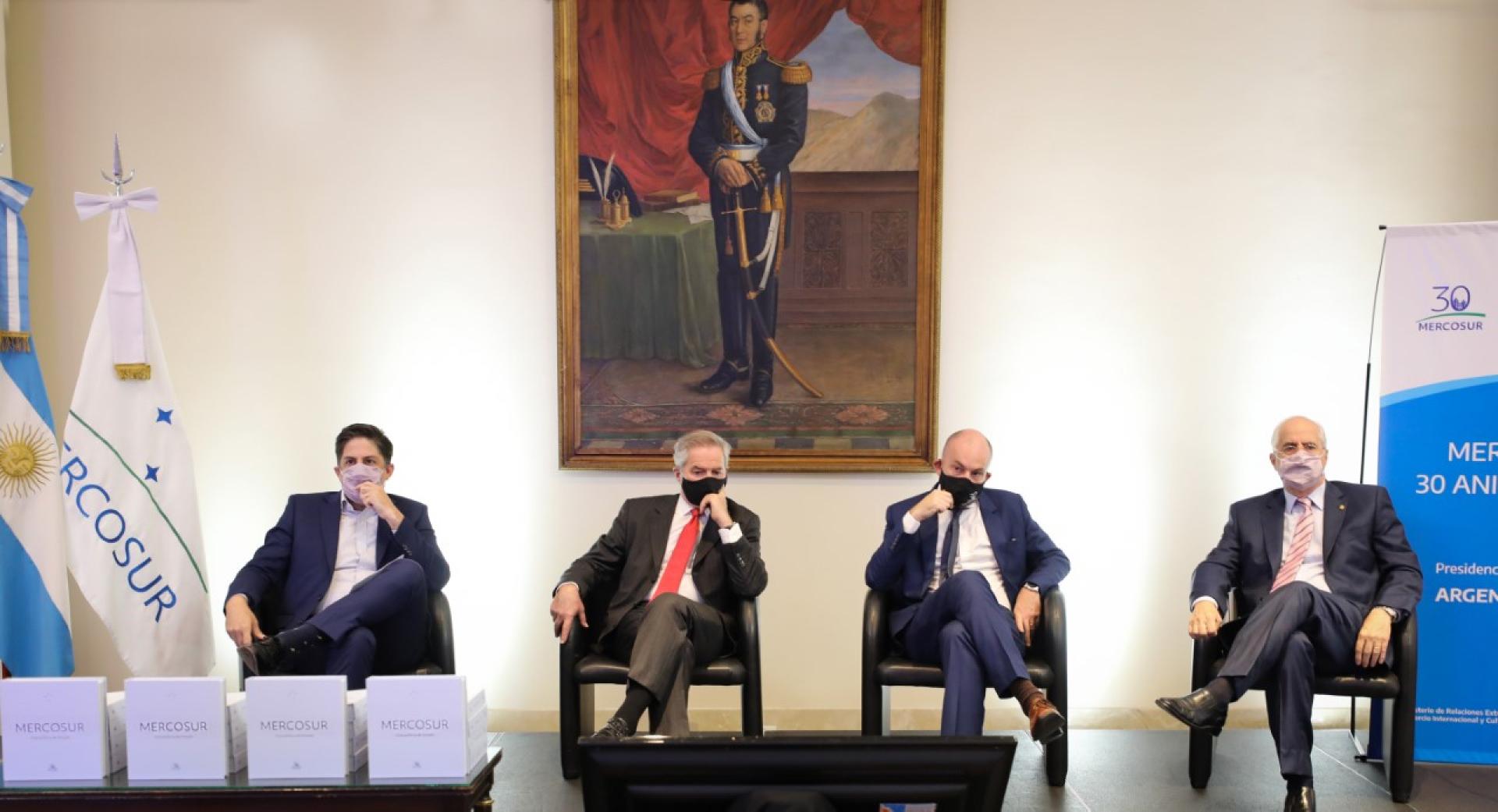 Foreign minister Solá: “Strengthening Mercosur is not just a lofty ideal, it is a matter of survival”

Today, at the Palacio San Martín, Foreign Minister Felipe Solá headed the presentation of the book “Mercosur, a State policy”, written and compiled by Mariano Kestelboim, the Argentine Ambassador to the regional bloc and to the Latin American Integration Association (ALADI) and stated that “Mercosur was a political decision that stemmed from certain regional conditions, the circumstances of individual countries and times of international unrest that were correctly interpreted; that is why there are many political decisions ahead of us.”

During the event, which was held following the protocols recommended by the Ministry of Health, Solá stated: “Politics must have a broad vision, and productive sectors expect us to tell them where we are going: this is a responsibility that cannot be delegated. The historical mandate is no longer the core issue. We have thirty years of history, but in this ever-changing world strengthening the bloc is no longer an epic or romantic action but a matter of survival, one example being the industry, regardless of sector.”

The Foreign Minister, joined by the Minister of Education, Nicolás Trotta, senator Jorge Taiana and Ambassador Kestelboim recalled that Mercosur “has a great asset that was achieved by boosting trade between members of the bloc and when citizens felt the bloc as their own in other countries of the region.” Solá also highlighted the strategic role of the Mechanism of Competitive Adaptation and the Structural Convergence Fund (FOCEM) and the need for expansion.

He also stated that, today, “there are governance issues that challenge globalization in different parts of the world, and there is a new revolution fuelled by the pandemic, by inequality and injustice,” and stressed that in this agitated world “the strength of facts is unstoppable, and it requires strong negotiating power.”

Finally, Solá stated that “more participation by all sectors is necessary, including governors and mayors, because we either achieve integration together or we do not achieve it at all, with a major political element.”

Minister Trotta for his part noted that: “in 30 years of Mercosur there are lessons learnt and we must be clear as to  the challenges ahead,  as highlighted by our President, our Foreign Minister and our administration: ongoing commitment to promote all collective actions of our region aimed at development with social justice and full integration, not only with regard to trade, but in every opportunity for equitable development. Our countries will only have a future if we remain together.”

Kestelboim, in turn, stated that “Mercosur is no longer a bloc that only focuses on trade, as it was at the beginning, now it also covers production, citizenship and culture.”  “We hope that the book can help to continue developing a strong Mercosur. Within the context of an unprecedented global crisis in the last fifty years, our government is determined to strengthen our bloc more than ever,” he added.

The prologue of the book was written by President Alberto Fernández and the preface by Foreign Minister Felipe Solá, and it includes essays by several ministers and figures of politics and the economy.

The event was also attended by the Deputy Foreign Minister, Pablo Tettamanti, the Chief of the Private Office of the Ministry of Foreign Affairs, Guillermo Justo Chaves and -via videoconference- by the Alternate Executive Director for Argentina and the Southern Cone at the World Bank Group, Cecilia Nahón; and the Argentine Ambassadors to the European Union, Pablo Grinspun; and to Uruguay, Alberto Iribarne. 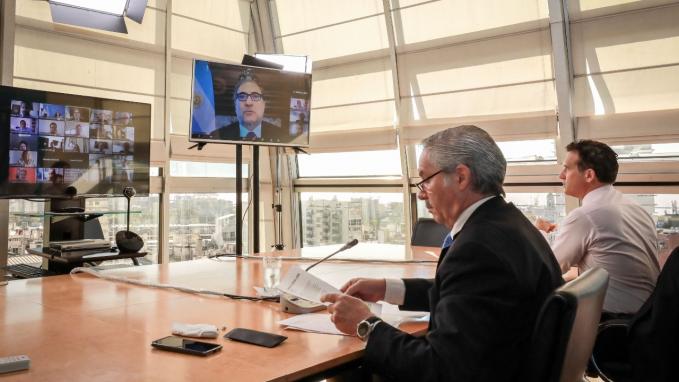 Monday 19 de April de 2021
Foreign minister Solá: “Mercosur more than each one of us”
Today, Foreign Minister Felipe Solá headed a meeting organized by the “Embajada Abierta” Foundation and the... 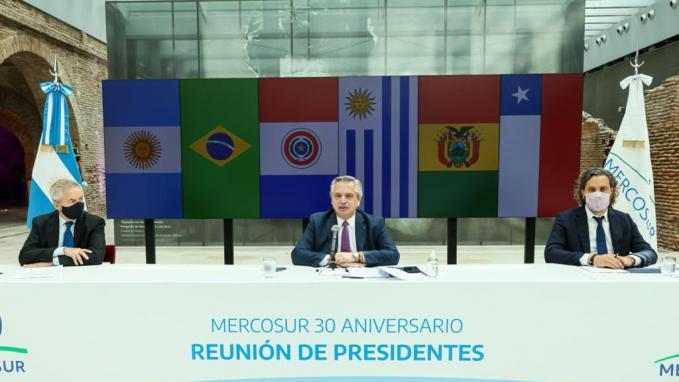 Friday 26 de March de 2021
On its 30th anniversary, Alberto Fernández defined Mercosur as an area characterized by peace, dialogue and cooperation
At the Bicentennial Museum of Casa Rosada, President Alberto Fernández chaired a virtual meeting with his counterparts... 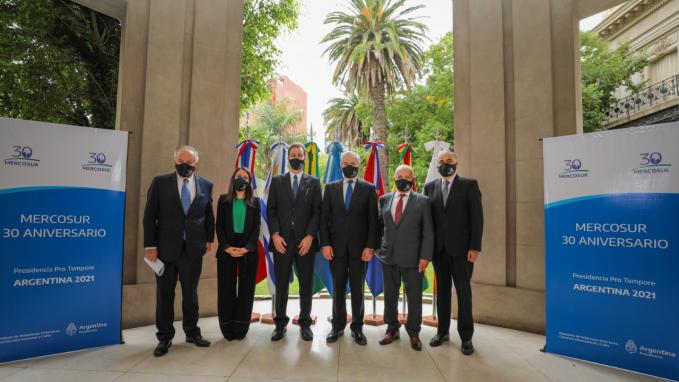 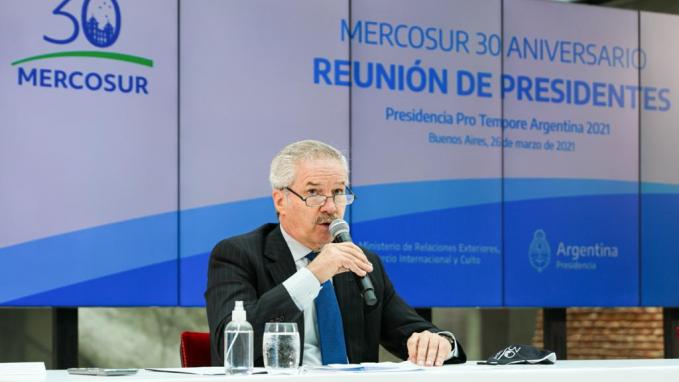 Friday 26 de March de 2021
Foreign minister Felipe Solá presented Mercosur citizenship statute
During the commemoration of the 30th anniversary of Mercosur, which this morning gathered the presidents of Argentina,...
Back to top