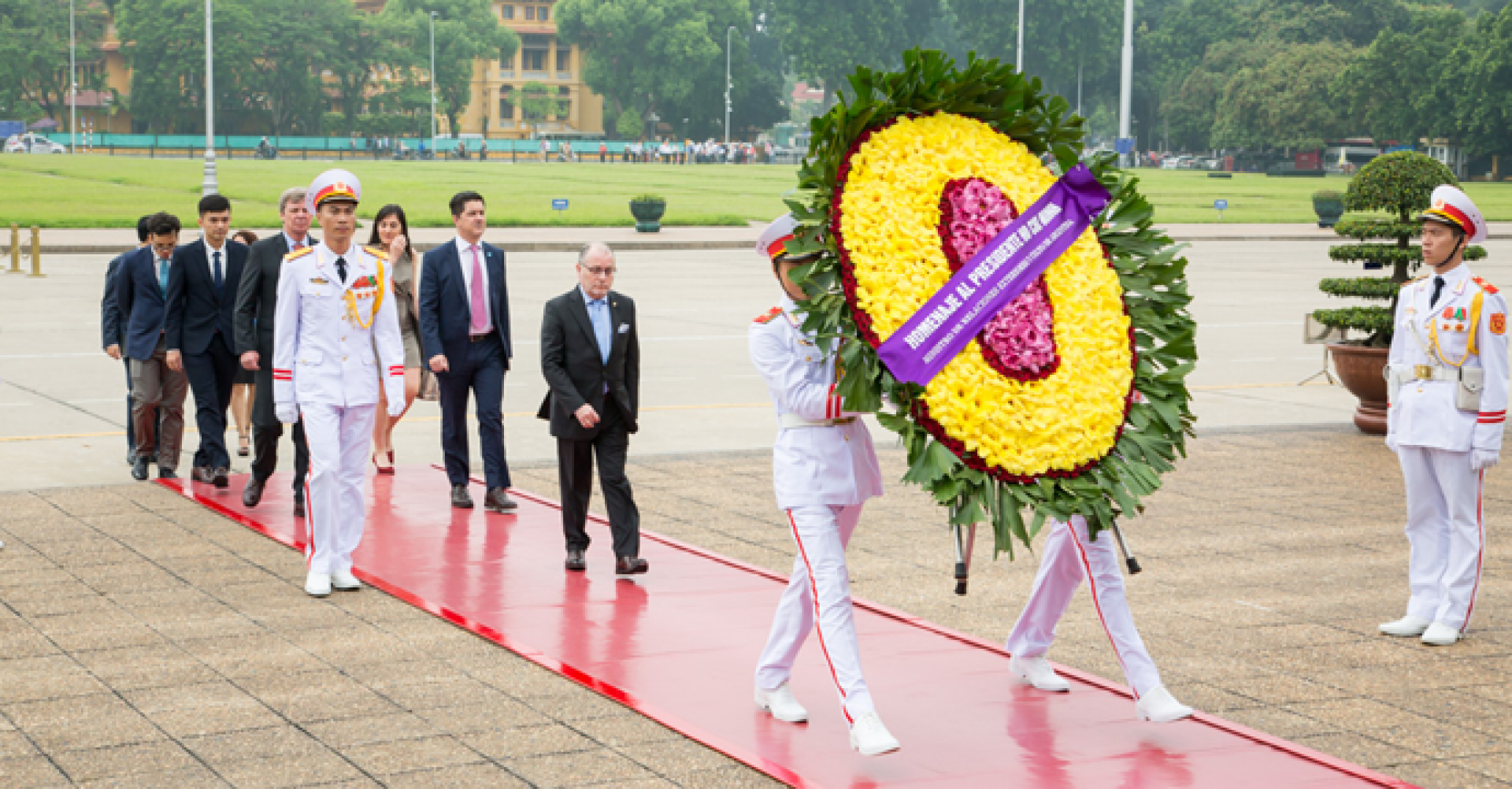 As part of the strengthening of political and economic relations with Southeast Asia, Foreign Minister Jorge Faurie visited Vietnam and Singapore with a busy schedule.

This year marks the 45th Anniversary of the Establishment of Diplomatic Relations between Vietnam and Argentina and, in that context, the Foreign Minister paid an official visit to the country on 30-31 July, and he met with the Vietnamese Prime Minister, Nguyễn Xuân Phúc, and with his Vietnamese counterpart, Phạm Bình Minh, among other authorities.

During the visit, the two countries agreed to strengthen the strategic partnership built in 2010 on the basis of three pillars: political dialogue, trade and investment promotion and technical cooperation.

The Argentine Fund for South-South and Triangular Cooperation (FO.AR) is one of the core components of Argentina's foreign policy and has funded the technical cooperation programme with Vietnam, based on which 15 projects have been developed throughout 20 years now.

In Hanoi, Foreign Minister Faurie opened a Regional Workshop on Technical Cooperation in agro-industry, organized jointly by the Argentine Foreign Ministry and the Government of Vietnam, which featured experts from ASEAN member countries and countries in the region, with a view to promoting Argentina's capabilities and positioning the country as a reference in the field of agro-industrial technology.

The workshop served as an opportunity for sharing experiences carried out within the framework of FO.AR in the fields of animal food; post-harvest technologies; plant health; foot-and-mouth disease control and plant biotechnology.

On the second day of the visit, Faurie opened a Business Seminar featuring Argentine and Vietnamese businesses from the food, fisheries, pharmaceutical and nuclear industries.

The Forum clearly showed the interest of Vietnamese businesses in Argentina's products, as well as the  growth potential that Vietnam still has for Argentine products.

The countries also underscored their mutual interest in bilateral visits and missions, such as the visit by a Vietnamese delegation that will arrive in Argentina in September, the upcoming Vietnam-Latin-America Trade Forum and the recent joint trip to Hanoi by three Argentine delegations headed by the Governors of Córdoba, Entre Ríos and Santa Fe.

The Foreign Minister then visited Singapore, where he met with the Prime Minister, Lee Hsien Loong, with his counterpart, Vivian Balakrishnan, and with the Minister of Trade and Industry, Chan Chun Sing.

At the meeting with the Prime Minister, Foreign Minister Faurie made reference to the reopening of the Argentine Embassy last year, which is a clear sign of the importance assigned by Argentina to Singapore in particular and to the Asia-Pacific region in general.

Lee Hsien Loong confirmed his upcoming visit to Argentina in the context of the G20 Leaders' Summit, which will take place in late 2018 in Buenos Aires, as Singapore is one of the guest countries, in its capacity as ASEAN Chair.

At the meeting with his counterpart, Vivian Balakrishnan, the two Foreign Ministers underscored the importance of the Free Trade Agreement between Mercosur and Singapore, the negotiation of which has recently been launched.

They also stressed the need to strengthen cooperation and assist the private sector so as to promote exports and boost investment (Foreign Direct Investment) growth in key sectors through concrete actions.

In addition, they exchanged diplomatic notes amending the 1997 agreement on air services, which will now enable better air links between the two countries and the region and thus bring benefits in the field of business and tourism trips.

Foreign Minister Faurie opened a bilateral Business Forum, organized by the Argentine Embassy, which was attended by over a hundred representatives of the main Singaporean investment groups, importers and distributors. At the Forum, a session of business rounds was held, enabling a mission of Argentine exporters to offer their products to over thirty local importers at the event.

Given that Singapore is a major investor at the global scale, ranking among the top 15 investment-making countries, the Argentine Foreign Minister held meetings with representatives of Singaporean investment funds, including the Government of Singapore Investment Corporation (GIC), the holding that controls most of the Singaporean global companies, Temasek, and the main global port operator, PSA International, which operates the Exolgan container terminal in Dock Sud, in the Province of Buenos Aires.

The ten member countries of ASEAN account for 3,4% of global GDP and 7% of global trade and the bloc is one of the most significant development experiences in recent decades. In 2016, ASEAN was the world's sixth richest economy and the world's third largest economy in Asia, after China and Japan.

The Foreign Minister attended the 51st Foreign Ministers' Meeting of ASEAN, at which he signed the Argentine Republic's accession to the Treaty of Amity and Cooperation in Southeast Asia (TAC), which constitutes a new stage in the development of ties between Argentina and ASEAN member countries and a platform to strengthen the long-standing friendship ties with the region.

"Today, we make a commitment to ASEAN's main Treaty"

During the meeting, Faurie stated Argentina's wish "to have the strongest relationship possible at the political, economic, trade and cooperation levels." He explained that although ASEAN "is our fourth largest trade partner and the second main destination for our exports", these figures "are way below the true potential of our economies."

Argentina shares the TAC principles, which are the core of Argentina's foreign policy, such as respect for sovereignty, non-interference, independence, international equality, territorial integrity, solidarity among peoples, the rule of international law, peaceful dispute settlement and multilateralism.

Together with Brazil and Chile, Argentina is one of the three Latin American countries that have accessed the TAC, which makes our country a regional leader in the area of exchanges and integration with ASEAN.