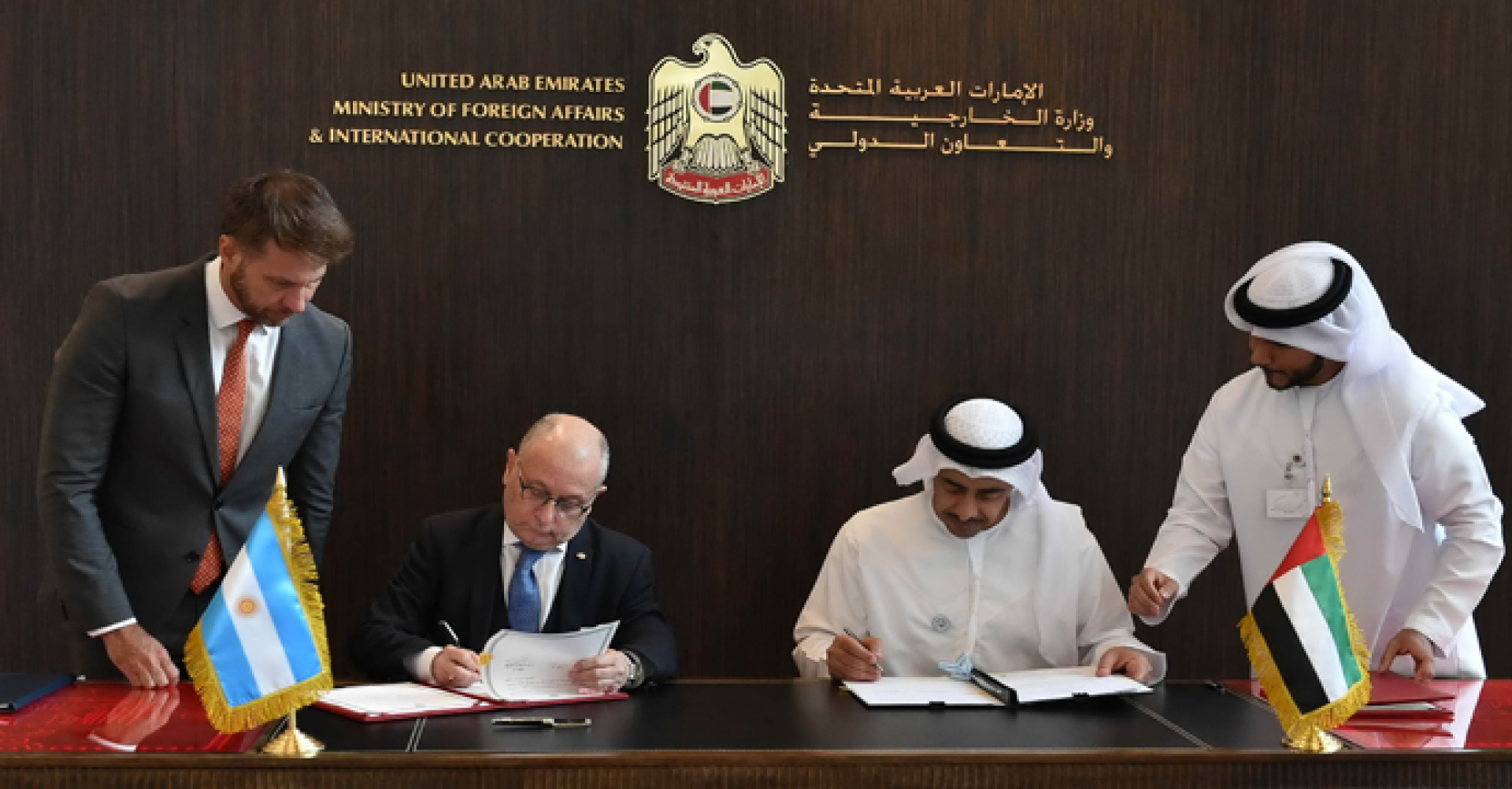 The Foreing Minister Trips to Morocco, Tunisia, France a the United Arab Emirates

From 30 March to 2 April, Foreign Minister Jorge Faurie went on an official trip to the Maghreb, which included visits to Morocco and Tunisia, where he met with high-level authorities. In both countries, the working meetings held focused on boosting cooperation projects and increasing trade exchanges, especially in the agricultural, energy and scientific-technological industries.

Argentina's trade with the two countries of Northern Africa has been growing steadily and shows great potential for future growth.

On his return journey, the Foreign Minister made a stop in Paris, where he met with his French counterpart and reviewed the progress made on the Economic and Trade Road Map established two years ago, as well as on the MERCOSUR - EU negotiations.

In addition, in mid-April, Foreign Minister Faurie went on a short trip to the United Arab Emirates, where he met with his Emirati counterpart and signed an Agreement for the Reciprocal Promotion and Protection of Investments, which is key to increasing the possibilities of obtaining funds for major infrastructure and energy projects in Argentina. In that vein, the Minister also held working meetings with managers of Emirati investment funds.

In the context of Argentina's strategy of intelligent insertion into the world, which aims, inter alia, to diversify exports to the Maghreb - an area of enormous economic potential and with high demand for food and value-added products,- from 30 March to 2 April, Foreign Minister Jorge Faurie went on a trip to the Kingdom of Morocco and the Republic of Tunisia, joined by Argentine Congressman Nicolás Massot.

In Rabat, the Foreign Minister took part in several activities with a view to strengthening political and economic ties with Morocco, including a bilateral meeting with his Moroccan counterpart, Nasser Bourita, as well as meetings at the Ministry of Agriculture and with the Speaker of the House of Representatives of Morocco, Habib El Malki.

The Foreign Ministers acknowledged that there is potential for growth in bilateral trade. Faurie conveyed to Bourita Argentina's interest in working jointly with Morocco to strengthen technical cooperation by fostering cooperation projects in the field of agro-industry and technological innovation in the food industry, as well as by expanding trade flows and diversifying bilateral trade through products featuring greater added value and technological development. The Argentine Foreign Minister also proposed increasing the number of business visits, trade missions and seminars, which will further a better understanding of the opportunities offered by the two markets.

The Ministers shared views on the current situation in the two countries and their respective regions, and ratified their willingness to work towards a MERCOSUR - Morocco agreement. They also discussed issues on the global agenda and the possibility of identifying new areas and projects of shared interest with a view to strengthening and broadening cooperation at the multilateral level.

Argentine exports to Morocco have increased steadily over the last two years and reached USD 509 million in 2017, a 38% increase vis-à-vis 2016.

The Argentine Foreign Minister and his Tunisian counterpart agreed that the two countries have great cooperation opportunities in sectors and products with high potential for business, such as agricultural machinery, silo bags, dairy products, sunflower and maize oil, renewable energy, the automotive and auto parts industry, logistics, medical supplies, the pharmaceutical industry, and electrical equipment. The Republic of Tunisia has recently confirmed that it will open up its markets for Argentine exports of edible bovine gelatin, queen bees and hides of ungulates.

Faurie reaffirmed Argentina's willingness to increase trade and Argentine exports, with a focus on agribusiness, renewable energy, and science and technology. Argentine exports to Tunisia have increased over the last three years and reached USD 135 million in 2017, a 7% increase vis-à-vis 2016.

Argentina and Tunisia share Technical Cooperation projects, within the framework of the Argentine Fund for South-South and Triangular Cooperation (FO.AR), especially in the agro-industrial sector. The Foreign Ministers expressed their willingness to strengthen cooperation, including both bilateral and triangular cooperation, with a focus on Sub-Saharan Africa.

On such occasion, the Foreign Ministers of the two countries signed a 2018-2020 Programme on Bilateral Cultural Cooperation and a Memorandum of Understanding between the National Directorate Centre for International Economics of the Foreign Ministry and the Tunisian Institute.

On the occasion of his visit to France, on 3 April Foreign Minister Faurie met with his French counterpart, Jean-Yves Le Drian, at the Ministry for Europe and Foreign Affairs. During the meeting, the Foreign Ministers expressed satisfaction at the great state of the bilateral relationship, which has been recently boosted by the meeting between Presidents Mauricio Macri and Emmanuel Macron in January.

On the political front, the Ministers underscored the importance of joint work in the fields of technical cooperation and human rights. In that vein, they signed a joint statement on actions aimed at increasing ratifications of the International Convention for the Protection of All Persons from Enforced Disappearance. They also addressed the current situation in Venezuela and in Europe.

On the economic front, the Ministers underscored the progress made on the "Joint Economic and Trade Road Map" established in 2016 and explored the possibility of renewing it by including new goals. The Ministers further addressed Argentina's OECD membership bid, which France supports, the progress made in the MERCOSUR-EU round of negotiations and France's growing interest in the new investment opportunities currently offered by Argentina.

In line with the National Government's decision to strengthen Argentina's political and trade relations, on 16 April, Foreign Minister Jorge Faurie visited the United Arab Emirates and met with his Emirati counterpart, Sheikh Abdullah bin Zayed Al Nahyan. The Foreign Ministers reviewed the bilateral relationship and all joint projects and initiatives and identified new areas for cooperation, including investment and trade.

At the end of the meeting, the Ministers signed an Agreement for the Reciprocal Promotion and Protection of Investments and a Memorandum of Understanding on the Mutual Recognition of Emergency Passports.

Among the issues addressed at these meetings were the increase in investments in the Port of Buenos Aires, the funds for solar energy projects in Jujuy and wind power projects in Chubut and the current opportunities in agro-business, fish farming, mining (lithium), information technologies, tourism and health.