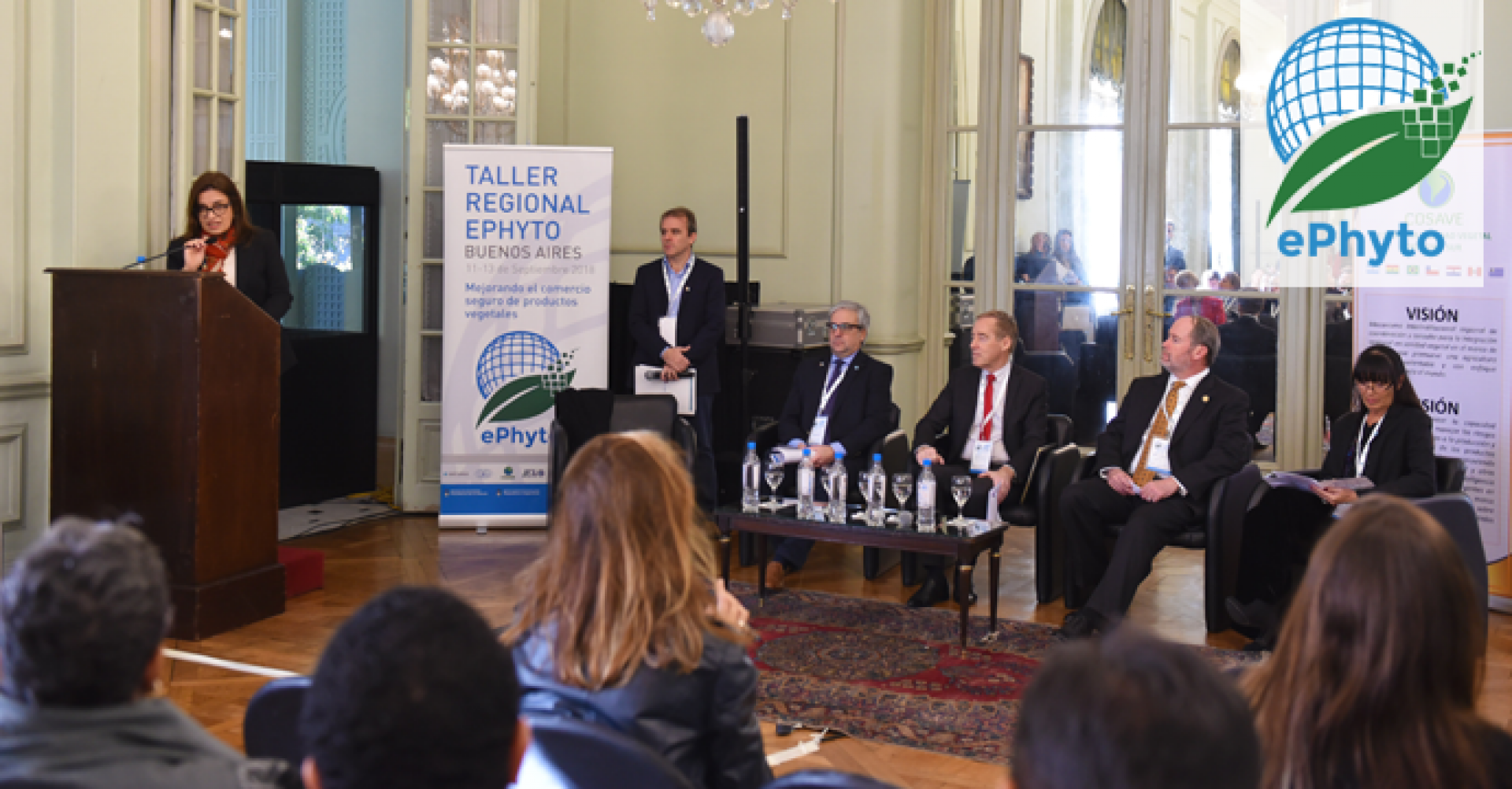 The regional workshop on "Exchange of Experiences in Electronic Phytosanitary Certification Systems (e-Phyto)" was held on 11-13 September at the Palacio San Martin, organized by the Argentine Foreign Ministry, through the General Directorate for International Cooperation and together with the National Service of Agri-food Health and Quality (SENASA).

Electronic phytosanitary certificates are an essential tool which Argentina has been developing in recent years and which streamline and facilitate international trade in vegetable-origin products, making it more dynamic and secure.

The workshop, which was cosponsored by the Plant Health Committee of the Southern Cone (COSAVE) and the Inter-American Institute for Cooperation on Agriculture (IICA), offered training programmes by experts from Argentina, the United States and Canada for technicians from Latin American and Caribbean guest countries, such as: Belize, Bolivia, Brazil, Chile, Colombia, Costa Rica, Cuba, the Dominican Republic, Ecuador, El Salvador, Guatemala, Mexico, Nicaragua, Panama, Paraguay, Peru, Uruguay. The event was also attended by a Vietnamese expert, who was invited due to her prominent participation in an agro-industrial regional seminar held by the Argentine Fund for International Cooperation in Hanoi last July.

The "e-Phyto Solution" is an initiative of the International Plant Protection Convention (IPPC) which encourages National Plant Protection Organizations (NPPO) of all Contracting countries to implement and develop the replacement of paper certificates with electronic phytosanitary certificates. The initiative will establish the infrastructure for developing countries to produce, send and receive electronic certificates based upon a generic web-based system, thus facilitating exchanges between countries that still lack a phytosanitary certification system and those which already have one.

Argentina has electronic phytosanitary certificates that meet international standards, which affords the country a leading role in this area along with Australia, New Zealand, the Netherlands, Canada and the United States. Argentina and Australia undertook cooperation actions in 2017 through the visit to Australia by Argentine experts from the National Service for Agri-food Health and Quality (SENASA), funded by the Argentine Fund for International Cooperation. As a result of the visit, an initiative was introduced to boost work by organizing a regional capacity-building seminar for countries in our region.

At the opening of the regional workshop, authorities from SENASA, together with the Australian Ambassador, Noel Campbell, underscored that both countries are assuming a leading role in boosting the "e-Phyto Solution" pilot, so as to improve plant protection through the networking of regional organizations, such as the Asia and Pacific Plant Protection Commission and the COSAVE.

The regional workshop on electronic phytosanitary certification enabled dynamic knowledge sharing through various thematic panels aimed at cooperating in the implementation of a Hub and the Generic National System (GeNS).

Experts from the public sector and representatives of chambers from several industries evaluated the work and expressed the growing interest in the use of e-Phyto in national, regional and international organizations, as well as in the Argentine private sector, since it reduces the possibility of document forgeries, enhances efficiency and facilitates the speedy clearance of goods in international trade, reducing costs and directly benefiting exporters and consumers.

One of the highlights of the event was the live demonstration of exchanges through the Hub, which turned the seminar into a true participatory workshop, with a predominant interest in sharing experiences and adopting best practices.