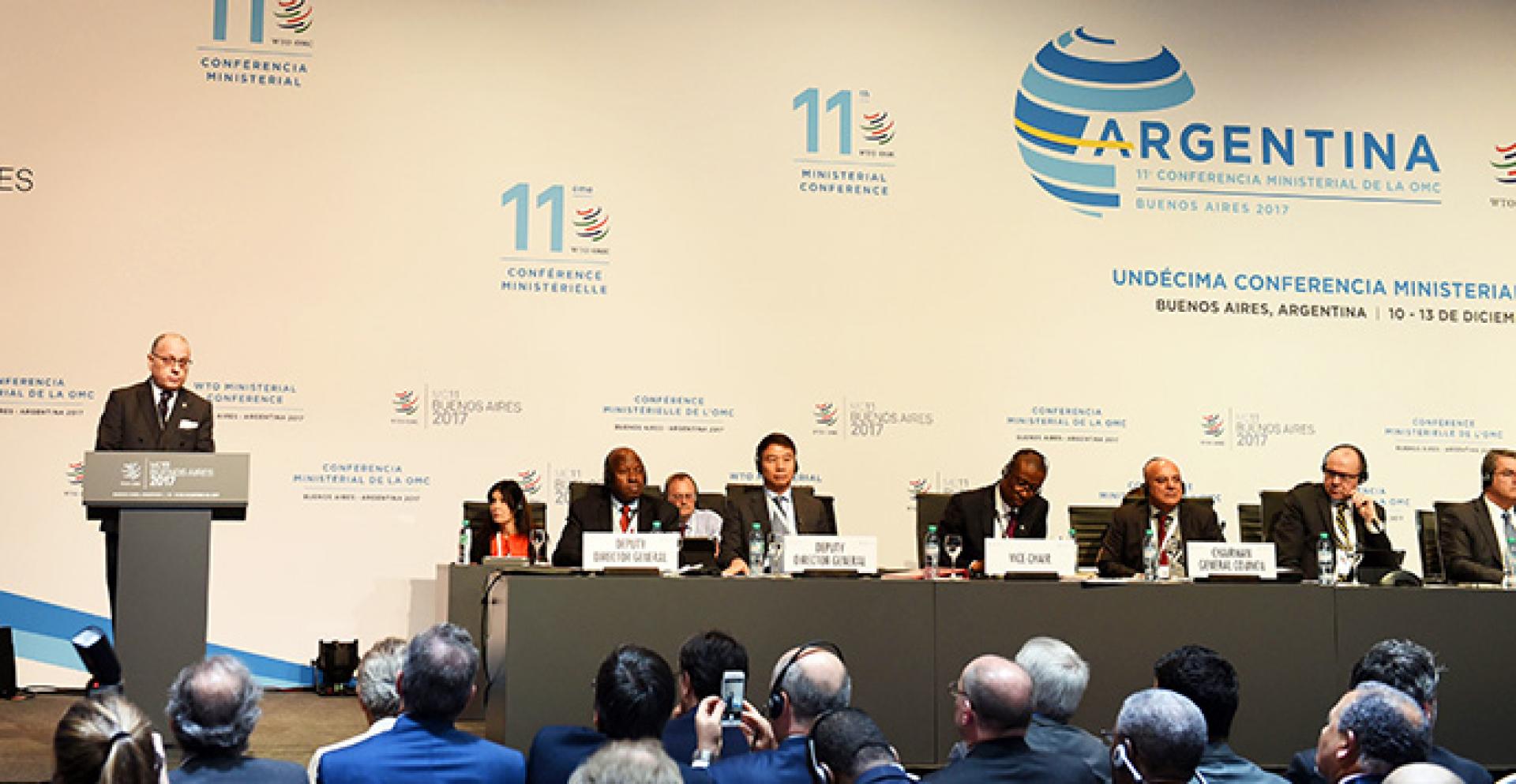 Adopting a firm stance in support of multilateralism, Argentina hosted the 11th WTO Ministerial Conference, which was held in South America for the first time. In his speech at the opening ceremony, President Macri spoke eloquently in defence of multilateralism, highlighting that the advantages of global and regional trade must benefit an increasing number of people, thus creating quality jobs and improving social welfare.

The 11th WTO Ministerial Conference (MC11), held on 10-13 December in Buenos Aires, was attended by approximately 4,000 delegates, including Ministers, high-ranking officials and delegates from the 164 Member States of the organization, as well as WTO observers, in representation of civil society, businesses and the press.

The Presidential Declaration signed at the MC11 opening ceremony by ten countries of the region (Argentina, Brazil, Colombia, Chile, Guyana, Mexico, Paraguay, Peru, Suriname and Uruguay) is, due to its characteristics, the first one of its kind in WTO history. It marked a milestone in support of the multilateral trade system and multilateralism, reaffirming that that is the best response in order to make the most of opportunities and tackle international trade challenges.

Although no ministerial declaration was agreed upon despite the various efforts made in Geneva and Buenos Aires, important decisions were taken in order to define the parameters for the future work of the WTO. After over 15 years of negotiations, considerable progress was made in the adoption of a decision on fisheries. A mandate was issued with a view to reaching an agreement in 2019 on the prohibition of subsidies in the sector, in accordance with the United Nations 2030 Agenda and Sustainable Development Goal No. 14.6, which seeks to preserve and sustainably use oceans and marine resources. In addition, Member States undertook to enhance transparency. This will not only enable the elimination of trade distortions but also contribute to the preservation of marine resources, the environment and food security.

Other MC11 decisions include the continuation of the work programme on e-commerce and the extension until 2019 of the moratorium on the imposition of tariffs on digital trade.

A highlight of the Conference was the Declaration on Trade and Women's Economic Empowerment, an unprecedented WTO initiative supported by 119 countries —including Argentina—, that is to say, by 73% of Member States. The Declaration seeks to introduce a gender perspective into trade policy and to support the integration of women into the global economy.

Furthermore, a series of measures were agreed in order to integrate developing and least developed countries into international trade, including a work programme for small economies, as well as to make progress on South Sudan's accession to the WTO.

On the sidelines of the negotiations and declarations, the Chair of the Conference convened a dialogue of ministers for the first time, which took place in an open session on the first day of the Conference. The purpose of the session was to create an environment in which ministers could discuss current international trade issues of greatest interest and difficulty, separated from the negotiations. The session participants engaged in a rich exchange of opinions and views.

A substantial number of meetings were held in the context of the Ministerial Conference, organized, inter alia, by think tanks and business associations, including a "Business Forum", the "Inter-Parliamentary Conference" and the "Symposium on Trade and Sustainable Development". The "Business Forum", organized by the Ministry of Production, was the first event of its kind held on the occasion of a Ministerial Conference, and reflects greater involvement by the private sector in WTO activities.

The MC11 was preceded by several coordination meetings between various groups of countries, Argentina having participated in the ministerial meetings of the Cairns Group, the Informal Group of Developing Countries, the Group of Friends of MSMEs and the Groups of Friends of E-commerce for Development and of Investment Facilitation, among others. As a result of these coordination meetings, Ministerial Declarations and Press Releases were issued (the latter for the meeting on e-commerce).