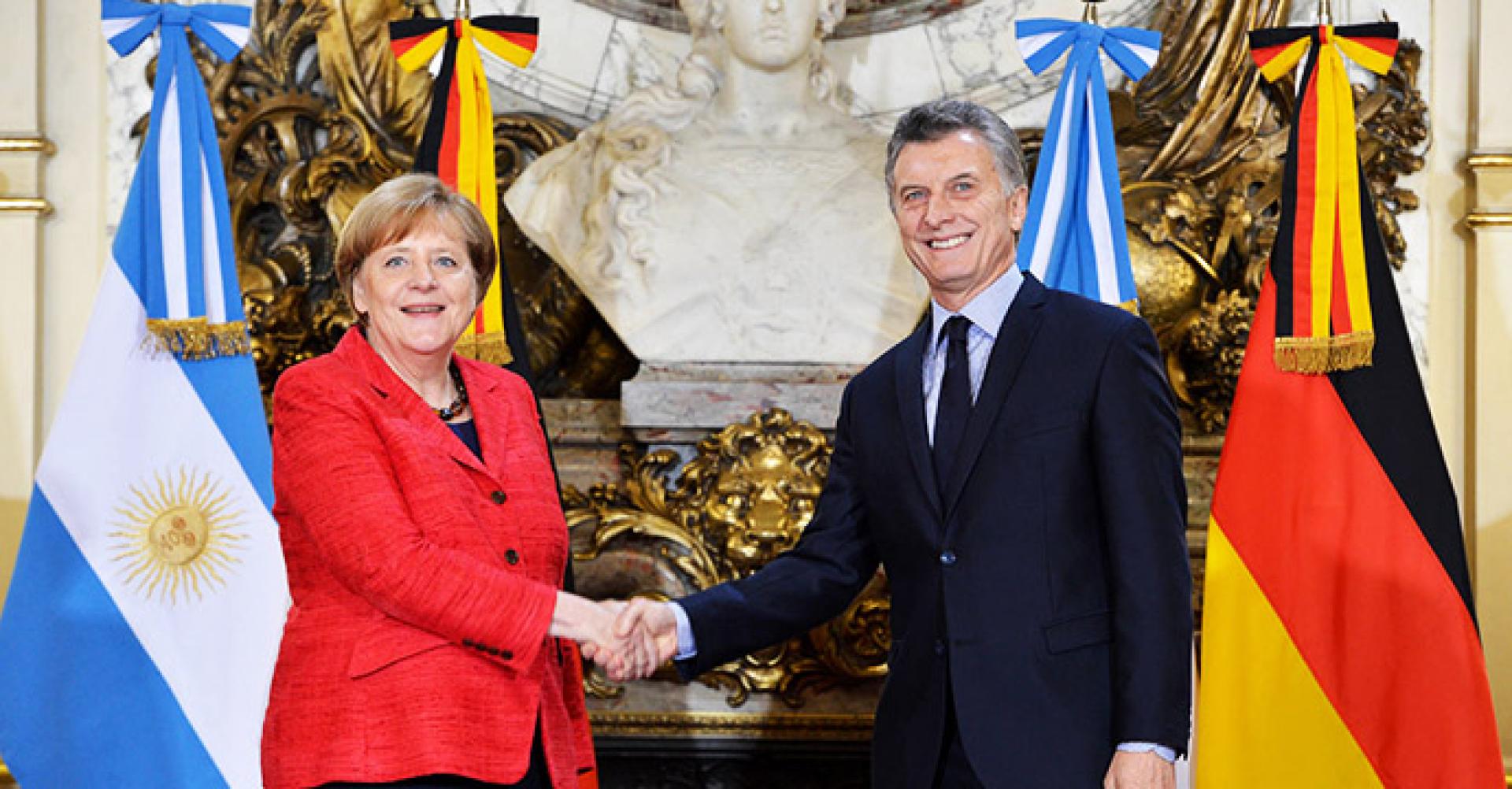 The German Chancellor’s official visit to Argentina provided an opportunity to advance the coordination of bilateral and multilateral issues, assess future investments and economic development exchanges, and boost the wide-ranging cooperation agenda that already exists between Argentina and Germany.

In early June, President Mauricio Macri received German Chancellor Angela Merkel on an official visit to Argentina. 15 years after the last visit by a German head of government to Argentina, Merkel's presence is an important indication of the political understanding reached between the two countries during the past year.

The bonds between Argentina and Germany are close and comprehensive. Both countries are undergoing a new stage marked by the strengthening of bonds, a broader positive agenda, and collaboration on various fields pertaining to the bilateral and multilateral arenas.

As regards the latter, both officials placed considerable importance on the talks held on the G20. In that regard, they welcomed the close cooperation achieved between the Argentine and German sherpas during the 2017 German Presidency of the Group, and they also made a commitment to maintain the same degree of cooperation during the 2018 Argentine Presidency of the Forum. In addition, they discussed the main issues to be addressed and agreed upon in the next sherpa meeting, with a view to issuing the Hamburg G20 Leaders’ Communiqué.

On the multilateral front, the meeting was an opportunity for both leaders to reaffirm their support for the Multilateral Trading System and, consequently, for the success of the upcoming 11th Ministerial Conference of the World Trade Organization (WTO), to be held in Buenos Aires in December. Furthermore, they renewed their commitment to the challenges set forth in the 2030 Development Agenda, as well as their intention to continue working for the benefit of third countries in Latin America through joint technical cooperation projects. Merkel also reiterated Germany’s support for Argentina's decision to enhance its participation in the Organisation for Economic Co-operation and Development (OECD).

As regards the bilateral arena, trade, economic and investment issues figured prominently during the visit. The German Chancellor was joined by a delegation of representatives from German companies that hold investments in Argentina and are considering an expansion, as well as from other German companies which have not yet established operations in Argentina but have expressed a similar interest in investing. Along those lines, the Argentine Foreign Ministry organized a working meeting between several Argentine Ministers and a group of CEOs from large German companies, who were informed of the current business climate in Argentina.

On a regional level, President Macri and Chancellor Merkel agreed on the importance of concluding the MERCOSUR-European Union Association Agreement negotiations in 2017, in order to increase trade and investment between both blocs in a balanced and mutually beneficial fashion.

Lastly, the scientific and technological chapter was also an important part of the visit, as reflected by Merkel's presence at the Buenos Aires Scientific and Technological Centre. The Centre is home to the CONICET Biomedical Research Institute, a partner of the Max Planck Society and the only institute of its kind in Latin America.

The broad scientific and technological exchange that has taken place between the two countries recently includes key issues for economic development, such as bioeconomics, oceanography, renewable energies, environmental protection, biomedicine and nanotechnology, among others.