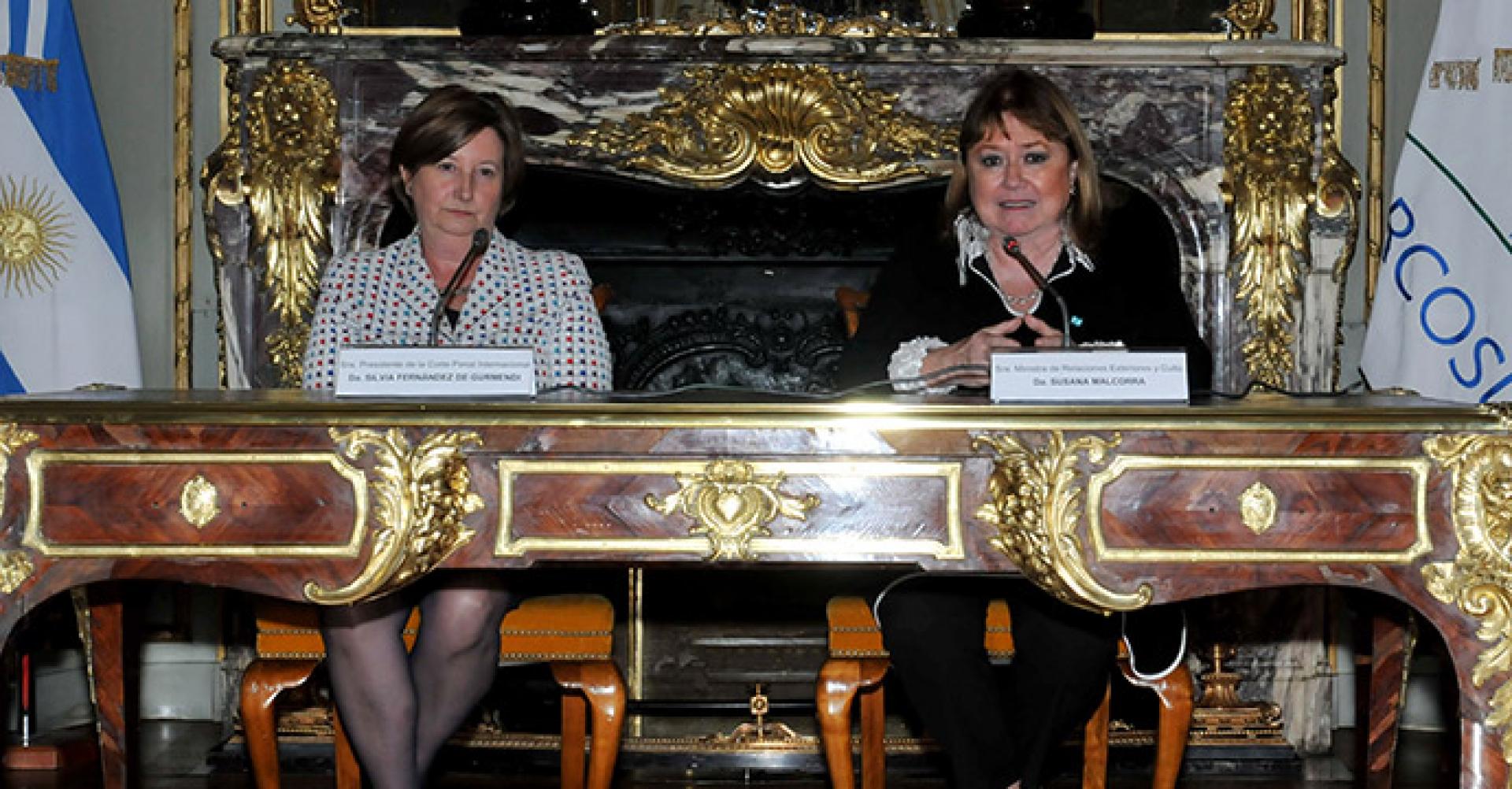 Through the signature of an agreement on the enforcement of sentences, Argentina reaffirms its support for the justice system based on the International Criminal Court as a tool to fight against impunity.

Last 18 April, in Buenos Aires, Foreign Minister Susana Malcorra and the President of the International Criminal Court (ICC), Silvia Fernández de Gurmendi, signed an agreement between the Argentine Republic and the ICC (https://goo.gl/kUq3hY) which allows the organization to enforce its sentences in Argentina, in compliance with the provisions of the Rome Statute, which established the Court in 1998.

In this regard, this agreement adds to the previous one on witness protection signed by both parties in November 2016, given that witness protection and the enforcement of ICC sentences are two of the three issues not expressly covered by the Statute, and must therefore be regulated by means of supplementary voluntary agreements.

The third issue which requires the voluntary cooperation of States is the relocation of accused persons whose release has been ordered by the Court, whether as a result of definitive acquittal or temporary release pending judgment, but whose return to their countries of origin would seriously endanger their lives or physical integrity. Argentina and the ICC are currently negotiating the signature of another agreement on this matter. By signing such agreement, the country will become the second State Party to the Rome Statute -and the first one in the region- to have signed agreements with the Court on all issues requiring voluntary cooperation.

The ICC is a permanent court with jurisdiction over war crimes, crimes against humanity and genocide (in 2010, the crime of aggression was added, in respect of which the Court’s jurisdiction has not yet been activated). The Court has neither a police force nor prison services of its own. Therefore, it is important to enlist the cooperation of States in different aspects related to the investigation and prosecution of crimes and the possibility of making the accused available to the Court.

This particular agreement on the enforcement of sentences is one of the first of its kind signed between the International Criminal Court and a State Party to the Rome Statute, and reinforces Argentina’s ongoing commitment to the ICC. In this regard, Malcorra underscored that the signing of the document “is yet another demonstration of Argentina's commitment to the Court, at a time when justice and certain principles are being called into question in some places."

Argentina's continued support for the International Criminal Court has been evidenced since its establishment, not only in the Assembly of States Parties but also in other forums of which the country is a member. It is worth noting that this year marks the 15th anniversary of the beginning of the ICC's operations, while next year will mark the 20th anniversary of the adoption of the Rome Statute.