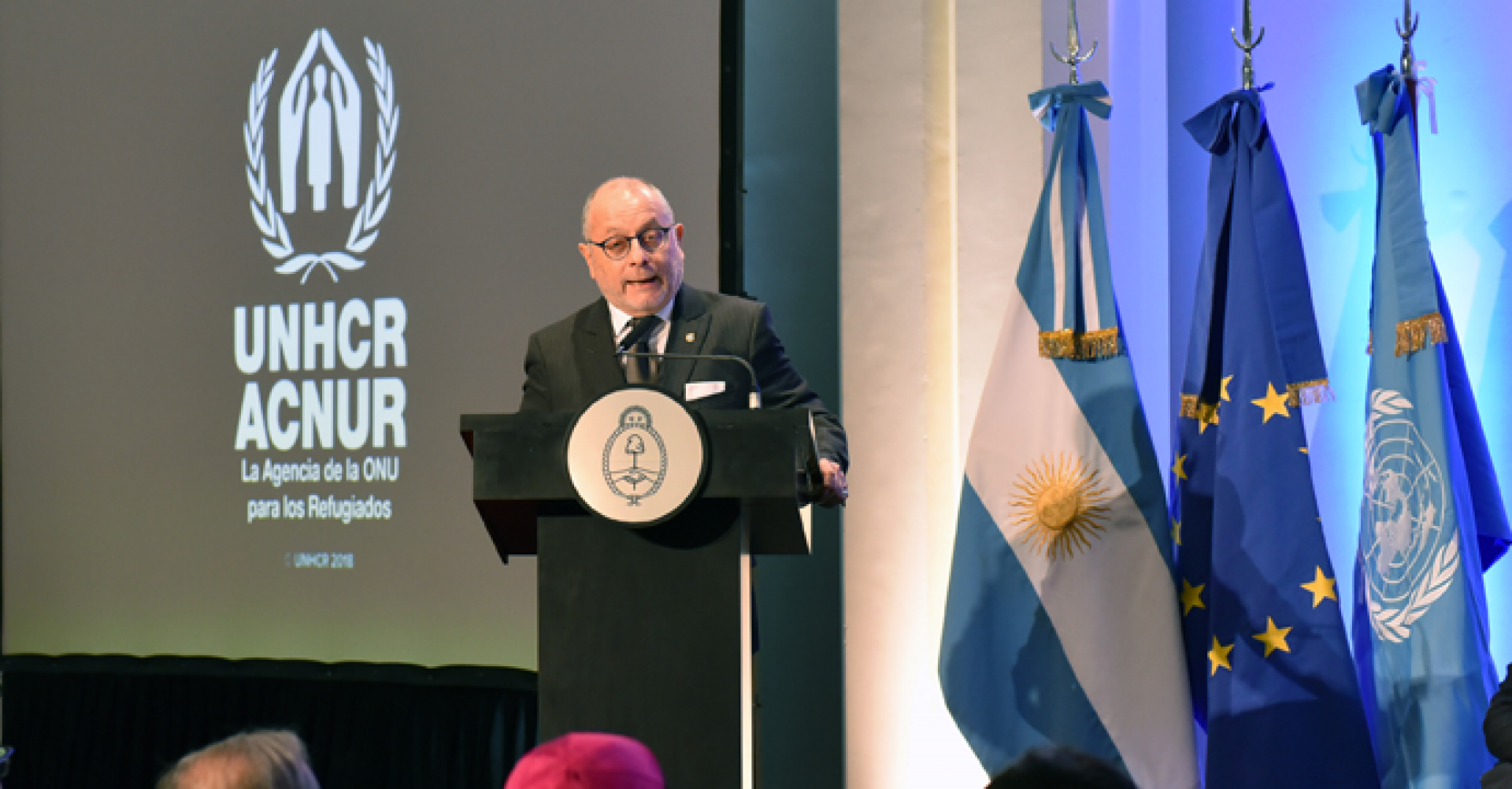 The Argentine Foreign Ministry and the UNHCR Regional Office for South America organized an event in commemoration of World Refugee Day, which took place on 26 June at the Palacio San Martin and was attended by Foreign Minister Jorge Faurie; the Regional Representative of the United Nations High Commissioner for Refugees, Michelle Manca di Nisa; the Regional Representative of the International Organization for Migration, Diego Beltrand, and the European Union Ambassador, Aude Maio-Coliche.

“We are witnesses to the greatest global mobilization of refugees, who often put their own and their relatives’ lives in danger, leaving their loved ones behind, because of war, economic poverty or the lack of respect for human rights,”  Foreign Minister Jorge Faurie stated as he presided over the ceremony.

“We have seen terrible images over the past few years, the horrors of exclusion, and we cannot let this happen,” he highlighted.

As decided by the United Nations General Assembly, World Refugee Day is annually held on 20 June to pay tribute to the strength and courage of refugees, as well as to raise public awareness and foster support for refugees, who have been forced to flee their lands of origin due to war, discrimination or violence.

The event was also an opportunity to present an EU Project to be implemented by the IOM and the UNHCR in order to support efforts to integrate refugees in Argentina.

In the presence of the diplomatic corps accredited to Argentina, national authorities, members of the National Commission for Refugees and international organizations and representatives of civil society gathered in the Libertador Room of the Palacio San Martín, Faurie noted Argentina's welcoming spirit towards people coming to our country and reviewed the actions that are being carried out so as to provide a concrete response to the global displacement crisis.

In this context, the Argentine Foreign Minister stated that "Latin America now faces the challenge of receiving migrants coming from a sister nation with which we share strong historic ties,"  adding that "over 2 million Venezuelans have settled throughout the region's countries.”

Indeed, under the MERCOSUR Residence Agreement, so far over 70,000 Venezuelan nationals have settled in the country to this date.

“But this is not the only challenge –Faurie continued. We are far from Syria in terms of geography, but here we have many Syrian people that came to live in Argentina at different times in our history and integrated. The Syrian community is one of the most important communities here. This is why it was only natural for Argentina to offer help to Syrian immigrants and establish the Syria Plan. No one obtains benefits when they have to leave their land and family, but the least we can do is try to help them so that they can integrate, which is what we do with Venezuelans: we welcome them with open arms, because we, the Argentine people, owe a lot to Venezuelans, just as they received us during our hard times."

For his part, the UNHCR Regional Representative underscored the displays of generosity towards refugees by individuals or families who open the doors to their homes, and agreed with the Foreign Minister on the results of the "Syria Plan", under which a humanitarian visa is granted to persons who have been affected by the existing conflict.

Okba Aziza, a Syrian refugee, also participated in the commemorative event, where he spoke about his decision to abandon his country and about his integration into the Argentine Republic.

Foreign Minister Faurie recalled Pope Francis's words when he urged people to "be close to refugees, meet with them and value their contribution so that they can better integrate into the communities that receive them."

The Foreign Minister also voiced his concern for the worldwide problem of statelessness and claimed that being stateless entails a violation of the individual's fundamental human rights.

Furthermore, he noted that the current global level of forced displacement is unprecedented and highlighted that those in charge of foreign policy have the responsibility to respond to this challenge: "We should not congratulate ourselves on the mechanisms we can create. We should make an effort to solve the problem."

"Today we do not celebrate Refugee Day. We commemorate our duty of remembrance so that there will be no more refugees” the Foreign Minister stated.

Argentina is a State Party to the 1951 Convention Relating to the Status of Refugees and its Optional Protocol and, in 2006, it enacted the General Law on Recognition and Protection of Refugees, deemed to be a model law at both regional and international level on account of its high protection standards and human rights perspectives. This law provided for the creation of the National Committee for Refugees (CONARE), an inter-ministerial agency operating within the framework of the Ministry of the Interior and charged with protecting refugees and applicants in Argentina.