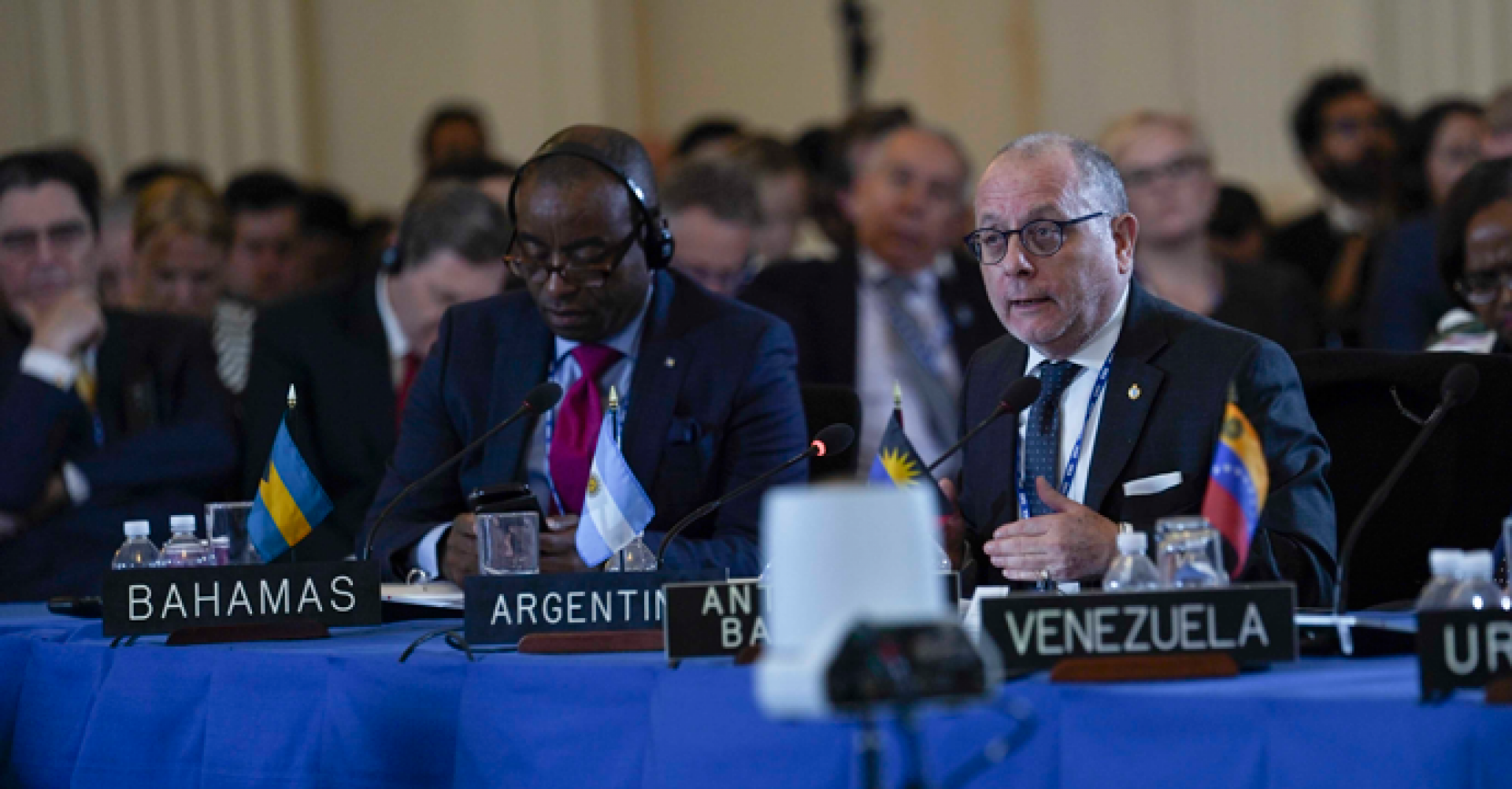 OAS. RESOLUTION ON VENEZUELA REAFFIRMS HEMISPHERIC ROLE OF THE ORGANIZATION IN DEFENDING DEMOCRACY

The agenda and the outcome of the 48th Regular Session of the OAS General Assembly (Washington, 4-5 June 2018) had great significance for Argentina, not only because of the renewed support obtained for the country's sovereignty claim over the Malvinas, South Georgias and South Sandwich Islands and the surrounding maritime areas, but also because it was an opportunity for the OAS to reaffirm its hemispheric role...

The agenda and the outcome of the 48th Regular Session of the OAS General Assembly (Washington, 4-5 June 2018) had great significance for Argentina, not only because of the renewed support obtained for the country's sovereignty claim over the Malvinas, South Georgias and South Sandwich Islands and the surrounding maritime areas, and the support for the "White Helmets Initiative", which for the last 24 years has provided assistance to deal with natural disasters and has developed projects to strengthen communities in the face of emergencies, but also because it was an opportunity for the OAS to reaffirm its hemispheric role in defending and promoting democracy, human rights, security and development - its four foundational pilars.

Moreover, the adoption of Resolution 2929 regarding the situation in Venezuela is of special importance since the relevance and efficacy of the OAS making a statement on the crisis in Venezuela was being questioned by the international community after the failed attempt in the 47th Regular Session of the OAS General Assembly held in 2017.

Said crisis, which has an impact on the whole region and has become a threat to regional stability and security in health, epidemiological, migration, food, social and education terms, among others, has worsened to an alarming extent and resulted in a growing exodus of Venezuelans: over 900,000 of them have migrated to various countries of the region between 2015 and 2017.

The serious deterioration of the human rights situation and the economic, political and social crisis in Venezuela had already been noted by the Inter-American Commission on Human Rights in its report titled Democratic institutions, rule of law and human rights in Venezuela presented by mid-February 2018.

A few days before the General Assembly, the Panel of Independent International Experts appointed by the Secretary General of the OAS to assess if crimes against humanity had been committed in Venezuela submitted its report. Experts Manuel Ventura Robles (Costa Rica), Santiago Cantón (Argentina) and Irwin Cotler (Canada) concluded that there are "reasonable grounds" to believe that crimes against humanity were committed in Venezuela during Nicolás Maduro's regime, which could lead to him being reported to the International Criminal Court.

Resolution 2929 regarding the situation in Venezuela, adopted after intensive diplomatic work, states that the election held on 20 May was not legitimate because of its failure to meet international standards and due to the lack of participation of all Venezuelan political actors. In addition, it calls attention once more to the interruption of the constitutional order in Venezuela and mentions the application of the mechanisms provided for under the Inter-American Democratic Charter in order to protect democracy, opening the possibility of suspending Venezuela from the OAS (for which 24 votes are required). It bears noting that the Resolution also urges the government of Venezuela to allow the entry of humanitarian assistance and to implement measures of epidemiological surveillance in order to avoid the escalation of the humanitarian and public health crisis.

Argentina considers that the OAS has made significant progress by approving Resolution 2929, thus overcoming last year's paralysis. This is a step prior to a possible future application of the Inter-American Democratic Charter to Venezuela, on the understanding that representative democracy is an essential condition for stability, peace and development in the region.

Argentina pledges its greatest efforts to achieve the abovementioned goals and will continue to work alongside the rest of the Member States to that end. The prestige of the OAS, 70 years since its establishment, will be under scrutiny according to its capacity to act in furtherance of this goal.