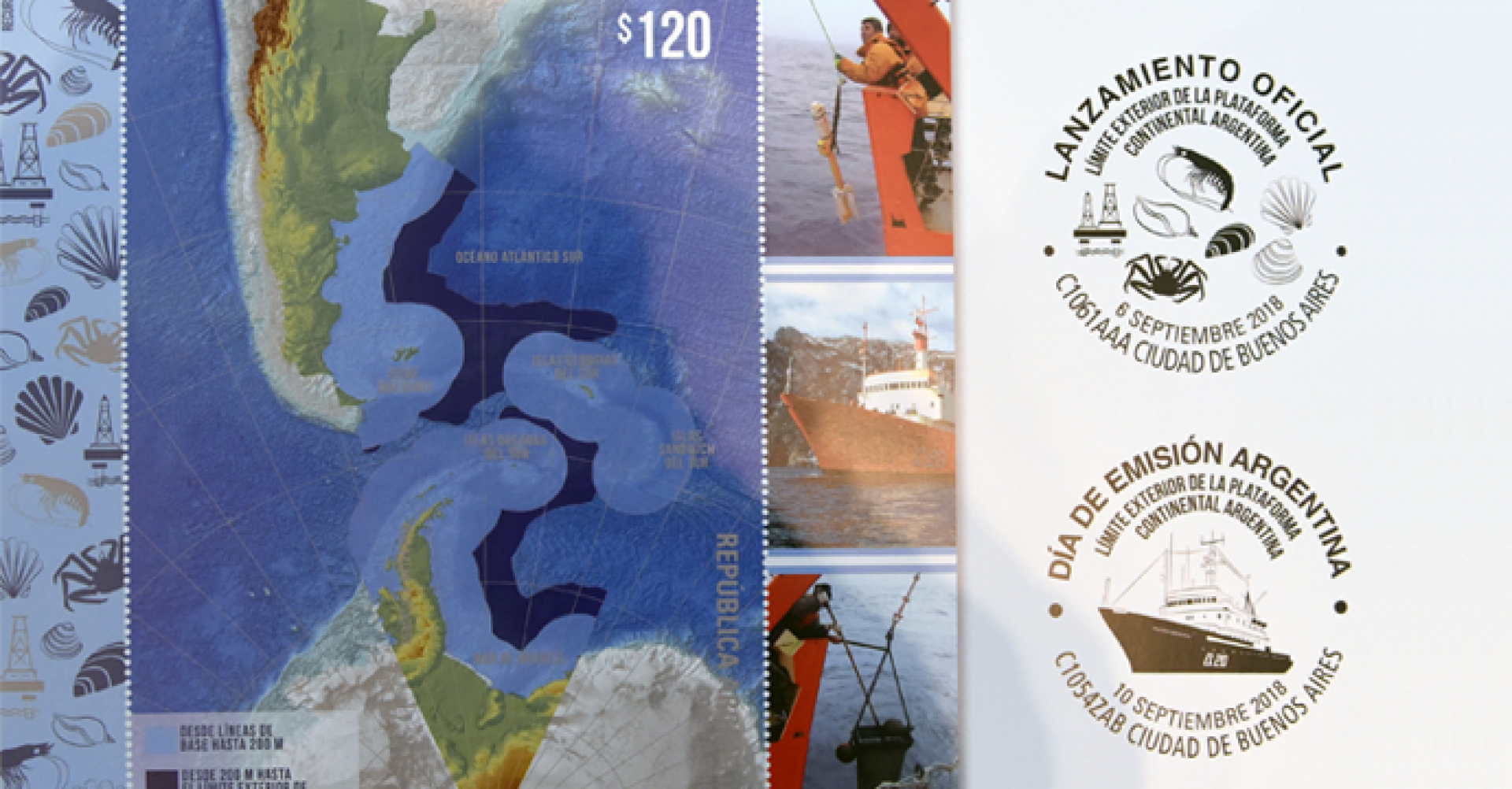 Throughout the evolution of the law of the sea, defending and consolidating Argentina's rights over the continental shelf, as a natural prolongation of the Argentine territory, has been a constant priority of Argentina's foreign policy.

On Thursday 6 September, the topic of the outer limit of the continental shelf brought together over 200 people who attended a ceremony held at the Palacio San Martin. During the first part of the event, the "Argentine continental shelf outer limit" stamp was launched. After presenting all the elements of the issue -the envelope, the stamp and the philatelic brochure- authorities from the Postal Service and the Foreign Ministry stamped the postmark. The stamp will help remember and disseminate to citizens all efforts made by Argentina with regard to this State Policy.

The officials then presented the Argentine continental margin database, which is the result of 20 years' work, during which time COPLA compiled, obtained and systematized seismic reflection and refraction, oceanographic, bathymetric, gravimetric and magnetometric data, mainly collected in the area between the 200 nautical miles limit and the beginning of the deep sea. This data was analyzed, sorted, classified and integrated by means of a Geographic Information System (GIS) Project, which was specially designed to grant quick data access, visualization and identification.

Although the primary goal of the work done by the National Commission on the Outer Limit of the Continental Shelf (COPLA) was to determine the outer limit of the continental shelf, a more ambitious goal was always envisaged. The newly collected data represented a unique opportunity for Argentina, so all along the work was carried out taking into consideration the possible value for other governmental organizations and the fact that these were areas subject to Argentina's legitimate sovereignty rights which were for the first time being reached with the best available technology.

Relevant governmental organizations on the subject, such as the Federal Fisheries Council, the Secretariat of Energy, the National Geographic Institute, the Argentine Navy, INIDEP, CONICET, the Secretariat for Science and Technology and Argentine scientists, among others, will have access to duly systematized and structured data on the areas analyzed by the Commission on the Limits of the Continental Shelf. Data democratization will facilitate work and promote research and development in Argentina, offering enormous possibilities for the future. Available data may be identified and requested by completing an online form at www.plataformaargentina.gov.ar.

At the closing of the event, the book "The Argentine Continental Margin. Between 35º and 55º South Latitude in the Context of Article 76 of the United Nations Convention on the Law of the Sea" was presented. This is a previously unpublished study on the Argentine continental margin, in the Spanish and English languages, which was carried out by COPLA alongside other institutions that have made their scientific contribution to the defence of the Argentine Republic's interests.

As a result of the work undertaken by COPLA for the collection of data, unknown topographic features were discovered and named. Through the Naval Hydrographic Service, the names were submitted to the Sub-Committee on Undersea Feature Names of the International Hydrographic Organization. The organization accepted the toponyms "Espolón Tierra del Fuego" and "Monte Submarino El Austral" submitted by Argentina, while at least three other toponyms are awaiting approval. Thanks to the contribution of the Argentine Republic, these names are now being used by other countries in their cartography and scientific publications.

The stamp, the database and the study will be a legacy for future generations, bearing witness to the untiring work pursued for over 20 years as a State Policy, which resulted in the delimitation of Argentina's largest outer limit and the acquisition of knowledge and data on the continental margin which are now part of the heritage of all of the Argentine people and offer enormous development possibilities for Argentina.