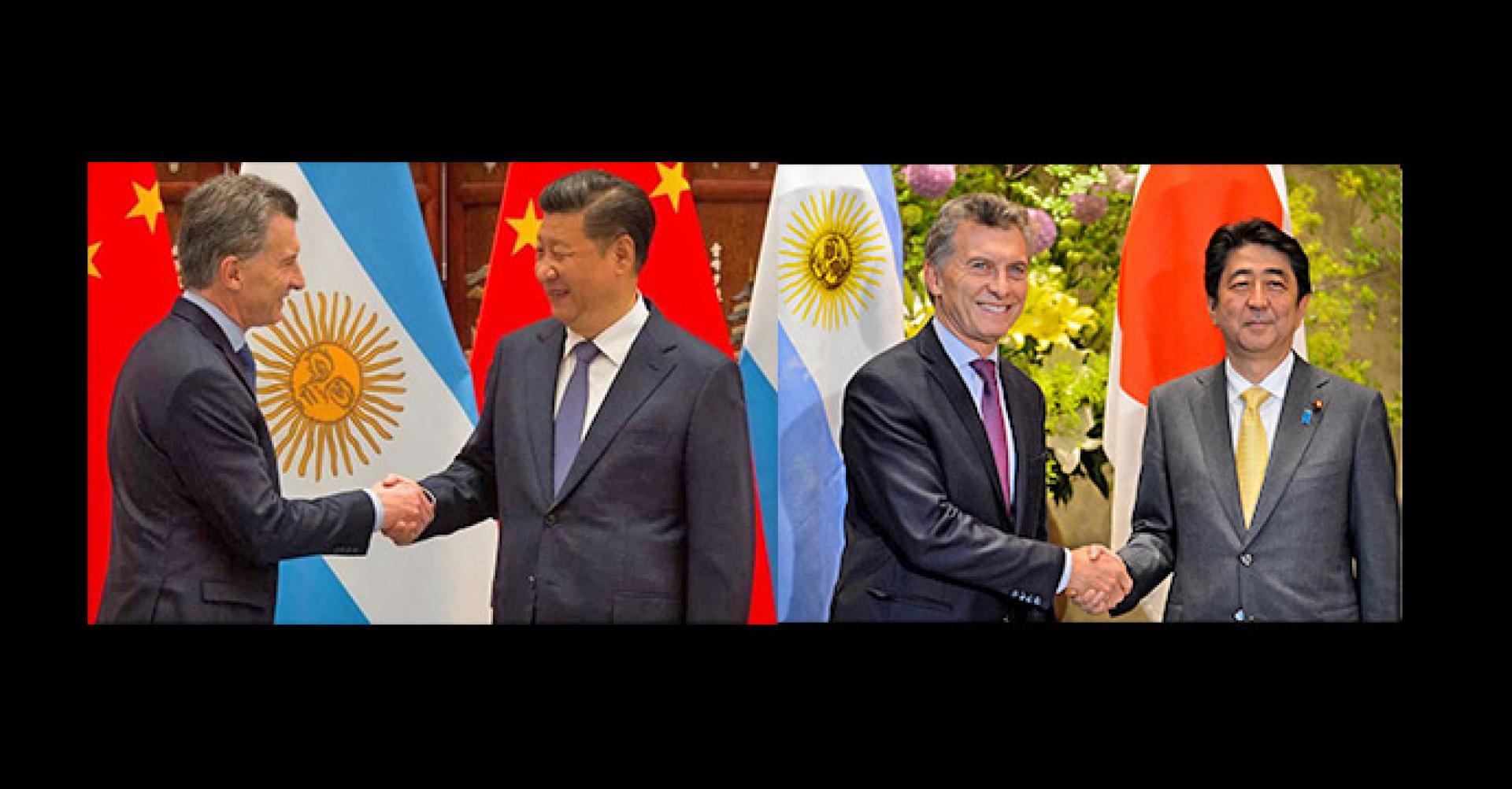 President Macri in China and Japan

In mid-May, the Argentine President travelled to Asia on an official visit to China and Japan. Meetings particularly focused on strengthening the bilateral relations and exploring new business opportunities.

On the first leg of his trip to Asia, President Mauricio Macri made a State Visit to China, the highlight of which was his meeting with President Xi Jinping. In addition to assessing the 2014-2018 Joint Action Plan and as a follow-up to the agreements reached during the 3rd Strategic Dialogue for Cooperation and Economic Coordination held last April, the two Heads of State agreed to continue projects on hydroelectric energy, nuclear energy and railways, among others, and to add new fields, such as infrastructure, non-renewable energies, agriculture, mining and the manufacturing industry. They also reached agreements on education, culture, visa facilitation, diplomatic academies and cooperation in the field of football.

At the level of Foreign Ministers, the Second Meeting of the Argentina-China Binational Standing Committee was held, in which the subcommittees reviewed the work undertaken on political, cultural, environmental, defence, agricultural, scientific, technological, nuclear, space and health affairs. New areas of joint work in the fields of education, tourism and sports were created as well.

In addition, the authorities of the Ministry of Agri-Industry agreed with the Chinese counterpart on the 2017-2022 Action Plan, which deals with the strengthening of agricultural cooperation, and on the 2017-2019 Action Plan, which deals with Health and Food Safety and Security. In addition, it was agreed to sign a Phytosanitary Protocol for export of table grapes to the Chinese market. The People's Republic of China is currently Argentina's second trade partner and the Chinese market offers unique potential for the growth of Argentine exports, specially for food sector production.

During his stay in China, President Macri also participated in the Belt and Road Forum for International Cooperation with the aim of positioning Argentina as a possible trade gateway to the rest of South American countries and as a supplier of processed food, science and technology and strategically important minerals. This decision is consistent with the Argentine Government's plan to forge smart bonds with China and with other countries that are part of this initiative - mostly countries in Asia, Africa and Europe.

Other important activities included a visit to the Argentine pavilion at the SIAL China Exhibition (Shanghai) – Asia’s most important food and beverage exhibition, in which Argentina was a guest of honour - and participation in the Argentina-China Business Forum, at which over 5,000 local businesspeople had an opportunity to discover the trade and investment opportunities offered by Argentina's new scenario.

All in all, the presidential trip to China marked the beginning of a new stage of stronger bilateral relations within the framework of a "comprehensive strategic partnership" between both countries.

After China, President Macri made a State Visit to Japan with a full agenda. At the key meeting he held with Prime Minister Shinzo Abe, both leaders highlighted the "Strategic Partners" status of the bilateral relations. The Argentine President particularly underscored that Japan is a priority for Argentina. He also agreed with Mr. Abe in welcoming the progress being made on the trade agenda with a view to further boosting bilateral exchange.

At the end of the meeting, there was a ceremony for the signature of agreements, a joint press conference and a dinner hosted by the Japanese Prime Minister in honour of the Argentine President and the First Lady.

During the visit, economic affairs played a prominent role, in view of the potential to work with Japan in the fields of trade and investment. Japan is the world's third largest economy, after the United States and China. With GDP of USD 4.7 trillion and GDP per capita at USD 37 thousand as of 2016, a significant share of Japan's nearly 130 million inhabitants have high purchasing power. Japan is also one of the world's main food importers.  Therefore, one of the main aims of the presidential visit was to foster negotiations for new Argentine products to access the Japanese market.

Furthermore, a Memorandum of Cooperation in the fields of agriculture, cattle breeding, fisheries, forestation and agri-industry was signed, aimed at fostering direct links between private actors from both countries and at identifying areas for potential investment.

Another highlight of the visit was the signature of a loan agreement between the Argentine Ministry of Finance, the Japan Bank for International Cooperation (JBIC) and Deutsche Bank, the purpose of which is to finance the supply of the Automatic Train Stop System for the eight railway lines of the Buenos Aires Metropolitan Area. This loan represents the resumption of financing for the Argentine State from an official Japanese institution after nearly 20 years.

Other important activities included the work meetings President Macri had with high-ranking executives of the leading Japanese firms and his participation in the Argentina-Japan Economic Forum, with over 400 attendees.  At the Forum, the Argentine President underscored the investment opportunities offered by Argentina and the measures taken by the Government to strengthen Argentina's insertion into the international political and economic community.

The President also met with the Argentina-Japan Parliamentary Friendship League and highlighted the importance of bilateral relations, reminding participants that 2018 will mark the 120th anniversary of diplomatic relations. Finally, on Saturday 20 May, President Macri and the First Lady were received by Their Imperial Majesties, Emperor Akihito and Empress Michiko, at the Tokyo Imperial Palace.