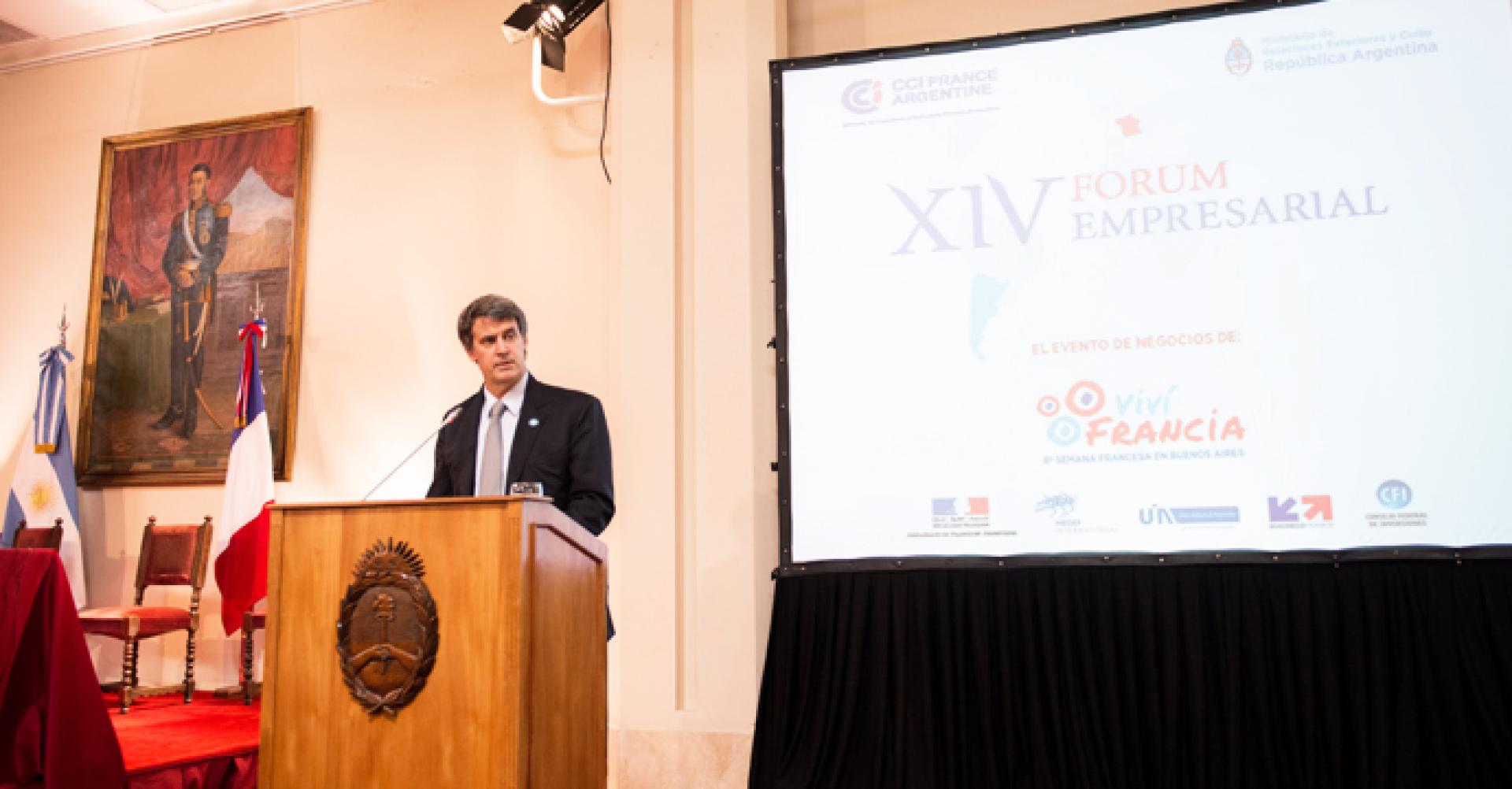 Along with the active national policy of attraction of foreign investment, a new edition of the French-Argentine Business Forum took place at the Ministry of Foreign Affairs. The event worked as a frame for the announcement by French firms of new investment and development plans in strategic economic sectors of the country.

The Ministry of Foreign Affairs of Argentina in cooperation with the French-Argentine Chamber of Commerce and Industry and the French Embassy in Argentina, organized the 14th French-Argentine Business Forum at the Palacio San Martin in September in order to generate tools to facilitate and encourage foreign investments and public-private partnerships.

The event was an excellent opportunity for more than 300 business representatives from both countries to interact with government officials and jointly explore investment and development opportunities in strategic sectors such as energy, infrastructure, agro-industry, communications and new technologies, among others. It is worth highlighting the participation of the French Business Association (MEDEF) delegation amid potential investors.

The Forum provided a perfect platform to hold top-level discussions, presentations and meetings, fulfilling the organizers expectations. Additionally, the economic situation of Argentina was explained to the participants. The presentations covered matters such as human capital and national competitiveness, infrastructure and transport, energy, innovation and new technologies. Furthermore, a seminar with local authorities from Santa Fe and Córdoba provinces was held to inform the participants of opportunities at a regional level.

As proof of the importance attached by the participating companies to this event, French company "SANOFI PASTEUR" chose the Forum to announce an investment of 300 million Argentine pesos for the expansion of its laboratories in the city of Pilar, province of Buenos Aires, which will double the level of its exports to the region.

France is a major worldwide investor. In 2015, it ranked fifth among foreign investors, with an outward Foreign Direct Investment (FDI) stock of USD 1,314,158 million. The main export destinations are the United States of America (18%), Belgium (14%), the Netherlands (10%), the United Kingdom (10%), and Germany (5%). According to data from the Central Bank of France, French investments abroad are mainly focused on manufactures (27% of the stock), financial services (25%), and electricity, gas and water (7%).

South America receives 3% of the outward FDI stock of France. This percentage is mainly directed to Brazil (75%), Argentina (9%), Venezuela (5%), and Chile (4%). In the case of Argentina, France is a key investor. In 2014, the French FDI stock in Argentina reached USD 3,344 million, placing France in the ninth position among all foreign investors, with a significant 3.7% share in the total FDI stock. In spite of being relatively undiversified, French FDI flows into Argentina have increased in recent years. The most relevant sectors are the automotive industry (24% in 2014), the oil sector (23%), and the chemical, rubber and plastic industries (17%).

In this regard, the French-Argentine Business Forum is part of a highly dynamic global business strategy that Argentina has been implementing recently in order to promote its insertion into international markets, generating the necessary bases for sustainable development in key sectors of the local economy.