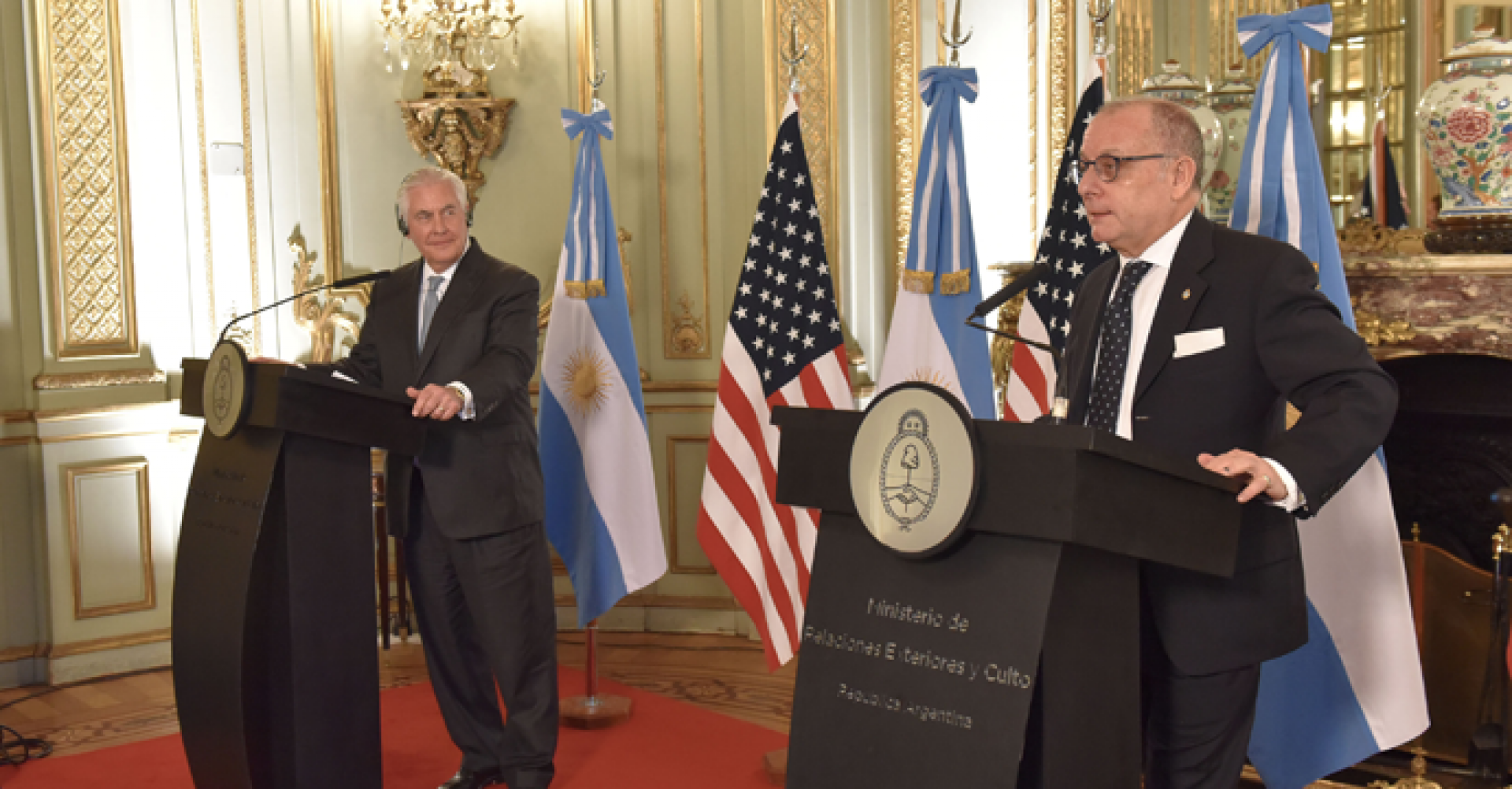 In the context of his Latin American tour, U.S. Secretary of State Rex Tillerson discussed the main issues on the bilateral dialogue agenda between Argentina and the United States alongside President Macri and other Cabinet ministers.

As part of his first Latin American tour, U.S. Secretary of State Rex Tillerson visited Argentina on 3-5 February. During his stay, he met with President Macri, Foreign Minister Faurie and other Cabinet ministers. The various meetings highlighted the substance of Argentina's foreign policy, which seeks to achieve an intelligent insertion into the world, in order for relations both with the United States and with other countries to be based on cooperation, stability and a diversification of the bilateral agenda, as well as on shared principles and values, such as the defence of democracy and human rights.

The U.S. Secretary of State's was the fourth high-level visit between both governments in just one year, following President Macri's visit to Washington in April 2017, U.S. Vice President Mike Pence's visit to Argentina in August and President Macri's visit to New York last November.  At every opportunity, the United States has shown great interest in our country and has explicitly supported the political and economic reform process implemented by the Argentine Government.

President Macri and Secretary of State Tillerson considered the main issues on the bilateral dialogue agenda between Argentina and the United States during a meeting held at the Presidential Residence in Olivos. At the meeting, they addressed issues of mutual interest in the fields of economy and trade, as well as the political situation in the region and the G20 agenda for 2018 under Argentina's presidency.

Argentina has publicly expressed its gratitude to the United States for its cooperation in the ARA San Juan submarine search and rescue operation, as it was the first foreign country to offer assistance and to provide Argentina with state-of-the-art equipment and large numbers of personnel. Secretary of State Tillerson conveyed his condolences to the families of the crew members aboard the ARA San Juan.

On the multilateral front, Argentina thanked the United States for its continued support for Argentina's OECD membership bid. In addition, both countries discussed Argentina's G20 presidency and agreed on the importance of the issues to be addressed at the Summit.

They also considered the current political, economic and humanitarian crisis in Venezuela, and the Foreign Minister took the opportunity to clearly state Argentina's position as regards the political process in Venezuela and its drift towards authoritarianism. Since President Macri took office, Argentina has condemned the restriction of freedoms (especially civil and political freedoms), has denied the legitimacy of the Constituent Assembly and has rejected the exclusion of opposition leaders from the upcoming elections. Furthermore, the Foreign Minister reiterated Argentina's support for all regional mechanism actions intended to repudiate the illegitimate acts of Nicolás Maduro's government. Both countries also agreed that any potential economic sanctions should not worsen the deteriorated social and humanitarian situation of the Venezuelan people.

Moreover, Argentina and the United States addressed the fight against organized transnational crime and terrorism, with a special focus on the links between those phenomena. Both countries expressed their willingness to boost existing cooperation in the field of security. Furthermore, the Secretary of State conveyed his condolences to the families of the Argentine victims of the terrorist attack occurred in October 2017 in New York.

Finally, both countries also addressed issues pertaining to the market access of products such as biodiesel and meat, and made a commitment to continue bilateral dialogue in this regard.